Here is What Hedge Funds Think About Cubic Corporation (CUB)

At the end of the third quarter, a total of 18 of the hedge funds tracked by Insider Monkey held long positions in this stock, a change of 38% from one quarter earlier. Below, you can check out the change in hedge fund sentiment towards CUB over the last 13 quarters. So, let’s see which hedge funds were among the top holders of the stock and which hedge funds were making big moves. 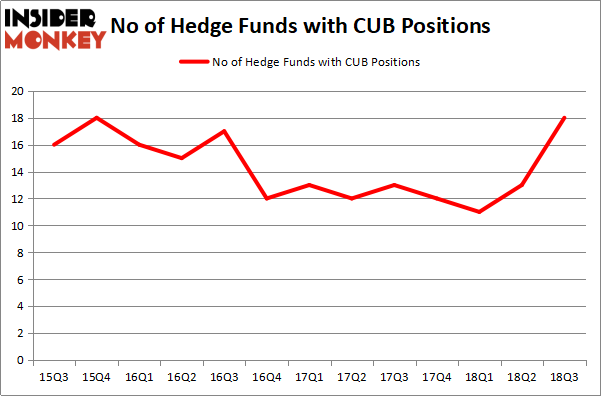 According to Insider Monkey’s hedge fund database, Mariko Gordon’s Daruma Asset Management has the number one position in Cubic Corporation (NYSE:CUB), worth close to $38.5 million, amounting to 3.6% of its total 13F portfolio. Coming in second is Rutabaga Capital Management, managed by Peter Schliemann, which holds a $16 million position; 3.7% of its 13F portfolio is allocated to the company. Some other members of the smart money with similar optimism encompass Richard S. Pzena’s Pzena Investment Management, Martin Whitman’s Third Avenue Management and Ken Griffin’s Citadel Investment Group.

With a general bullishness amongst the heavyweights, some big names were leading the bulls’ herd. Marshall Wace LLP, managed by Paul Marshall and Ian Wace, assembled the most outsized position in Cubic Corporation (NYSE:CUB). Marshall Wace LLP had $6 million invested in the company at the end of the quarter. Israel Englander’s Millennium Management also initiated a $2.5 million position during the quarter. The other funds with brand new CUB positions are Richard Driehaus’s Driehaus Capital, Chuck Royce’s Royce & Associates, and Joel Greenblatt’s Gotham Asset Management.

As you can see these stocks had an average of 13 hedge funds with bullish positions and the average amount invested in these stocks was $76 million. That figure was $103 million in CUB’s case. 8×8, Inc. (NASDAQ:EGHT) is the most popular stock in this table. On the other hand Gold Fields Limited (NYSE:GFI) is the least popular one with only 10 bullish hedge fund positions. Cubic Corporation (NYSE:CUB) is not the most popular stock in this group but hedge fund interest is still above average. This is a slightly positive signal but we’d rather spend our time researching stocks that hedge funds are piling on. In this regard EGHT might be a better candidate to consider a long position.