Here is What Hedge Funds Think About Bruker Corporation (BRKR)

Bruker Corporation (NASDAQ:BRKR) has seen a decrease in hedge fund sentiment recently. Our calculations also showed that BRKR isn’t among the 30 most popular stocks among hedge funds. 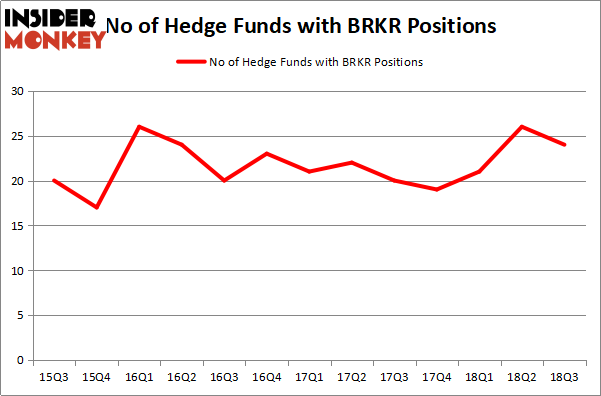 Seeing as Bruker Corporation (NASDAQ:BRKR) has faced bearish sentiment from the smart money, it’s easy to see that there is a sect of money managers who sold off their entire stakes heading into Q3. At the top of the heap, Steve Cohen’s Point72 Asset Management cut the largest position of all the hedgies monitored by Insider Monkey, worth close to $20.5 million in stock, and Glenn Russell Dubin’s Highbridge Capital Management was right behind this move, as the fund cut about $1.6 million worth. These moves are important to note, as total hedge fund interest fell by 2 funds heading into Q3.

As you can see these stocks had an average of 19.25 hedge funds with bullish positions and the average amount invested in these stocks was $246 million. That figure was $250 million in BRKR’s case. Oshkosh Corporation (NYSE:OSK) is the most popular stock in this table. On the other hand Viper Energy Partners LP (NASDAQ:VNOM) is the least popular one with only 12 bullish hedge fund positions. Bruker Corporation (NASDAQ:BRKR) is not the most popular stock in this group but hedge fund interest is still above average. This is a slightly positive signal but we’d rather spend our time researching stocks that hedge funds are piling on. In this regard OSK might be a better candidate to consider a long position.