There are several ways to beat the market, and investing in small cap stocks has historically been one of them. We like to improve the odds of beating the market further by examining what famous hedge fund operators such as Carl Icahn and George Soros think. Those hedge fund operators make billions of dollars each year by hiring the best and the brightest to do research on stocks, including small cap stocks that big brokerage houses simply don’t cover. Because of Carl Icahn and other elite funds’ exemplary historical records, we pay attention to their small cap picks. In this article, we use hedge fund filing data to analyze Brighthouse Financial, Inc. (NASDAQ:BHF).

Is Brighthouse Financial, Inc. (NASDAQ:BHF) a buy here? Prominent investors are becoming less confident. The number of long hedge fund positions were cut by 6 lately. Our calculations also showed that BHF isn’t among the 30 most popular stocks among hedge funds. Greenlight Capital’s David Einhorn said the following about BHF about a year ago:

“We initiated a large long position in Brighthouse Financial (BHF) at an average of $57.92. BHF was spun out of MetLife and was formerly most of MetLife’s U.S. Retail business, selling annuities and life insurance. BHF appears to be a traditional spin-off – an underperforming and unloved part of a larger, more successful company. The tone of the spin-off road show was noticeably downbeat, with management advancing a business plan that does not sound particularly exciting for shareholders. Notably, despite very conservative capitalization and high risk-based capital levels, the base expectation calls for no capital return until 2020. The result is a valuation of just 56% of book value and 6.4x 2018 EPS estimates.”

What does the smart money think about Brighthouse Financial, Inc. (NASDAQ:BHF)?

At the end of the third quarter, a total of 22 of the hedge funds tracked by Insider Monkey held long positions in this stock, a change of -21% from one quarter earlier. On the other hand, there were a total of 23 hedge funds with a bullish position in BHF at the beginning of this year. With the smart money’s capital changing hands, there exists an “upper tier” of key hedge fund managers who were adding to their holdings significantly (or already accumulated large positions). 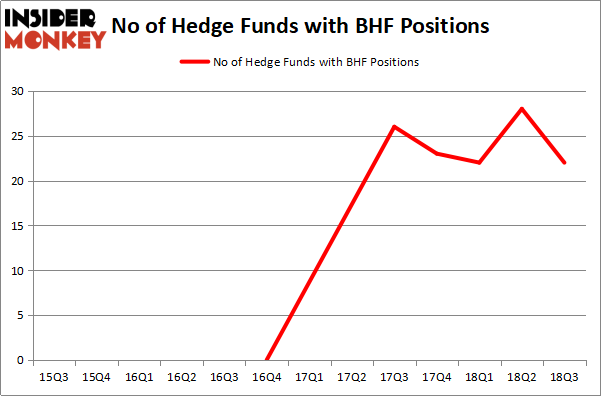 More specifically, Greenlight Capital was the largest shareholder of Brighthouse Financial, Inc. (NASDAQ:BHF), with a stake worth $512.3 million reported as of the end of September. Trailing Greenlight Capital was Diamond Hill Capital, which amassed a stake valued at $289.6 million. EJF Capital, Masters Capital Management, and Masters Capital Management were also very fond of the stock, giving the stock large weights in their portfolios.

Due to the fact that Brighthouse Financial, Inc. (NASDAQ:BHF) has experienced a decline in interest from the aggregate hedge fund industry, we can see that there exists a select few hedge funds who sold off their full holdings by the end of the third quarter. It’s worth mentioning that Benjamin A. Smith’s Laurion Capital Management cut the largest investment of the “upper crust” of funds tracked by Insider Monkey, totaling close to $21.1 million in stock, and Ken Griffin’s Citadel Investment Group was right behind this move, as the fund said goodbye to about $15.4 million worth. These moves are interesting, as total hedge fund interest was cut by 6 funds by the end of the third quarter.

View table here if you experience formatting issues.
As you can see these stocks had an average of 22.5 hedge funds with bullish positions and the average amount invested in these stocks was $429 million. That figure was $1.06 billion in BHF’s case. The Dun & Bradstreet Corporation (NYSE:DNB) is the most popular stock in this table. On the other hand Brixmor Property Group Inc (NYSE:BRX) is the least popular one with only 18 bullish hedge fund positions. Brighthouse Financial, Inc. (NASDAQ:BHF) is not the least popular stock in this group but hedge fund interest is still below average. This is a slightly negative signal and we’d rather spend our time researching stocks that hedge funds are piling on. In this regard DNB might be a better candidate to consider a long position.

We actually took a closer look at BHF at the beginning of this year after reading Einhorn’s thesis and decided not to recommend a position in BHF. Our flagship strategy considers the stock picks only the best performing hedge fund managers and unfortunately Einhorn has been among those managers for a while. We won’t be recommending a position in BHF at this point even though the stock is 40% cheaper compared to where it was trading at the beginning of this year.