It was a rough fourth quarter for many hedge funds, which were naturally unable to overcome the big dip in the broad market, as the S&P 500 fell by about 7% during October and average hedge fund losing about 3%. The Russell 2000, composed of smaller companies, performed even worse, trailing the S&P by about 4 percentage points during the first half of Q4, as investors fled less-known quantities for safe havens. This was the case with hedge funds, who we heard were pulling money from the market amid the volatility, which included money from small-cap stocks, which they invest in at a higher rate than other investors. This action contributed to the greater decline in these stocks during the tumultuous period. We will study how this market volatility affected their sentiment towards BRF Brasil Foods SA (NYSE:BRFS) during the quarter below.

Hedge fund interest in BRF Brasil Foods SA (NYSE:BRFS) shares was flat at the end of last quarter. This is usually a negative indicator. At the end of this article we will also compare BRFS to other stocks including Ciena Corporation (NASDAQ:CIEN), Skechers USA Inc (NYSE:SKX), and to get a better sense of its popularity.

If you’d ask most market participants, hedge funds are assumed to be unimportant, outdated financial vehicles of yesteryear. While there are more than 8,000 funds trading today, Our researchers hone in on the elite of this club, approximately 700 funds. Most estimates calculate that this group of people control bulk of the hedge fund industry’s total asset base, and by keeping track of their unrivaled investments, Insider Monkey has discovered several investment strategies that have historically surpassed Mr. Market. Insider Monkey’s flagship hedge fund strategy defeated the S&P 500 index by 6 percentage points per year since its inception in May 2014 through early November 2018. We were able to generate large returns even by identifying short candidates. Our portfolio of short stocks lost 24% since February 2017 (through December 3rd) even though the market was up nearly 23% during the same period. We just shared a list of 11 short targets in our latest quarterly update.

How have hedgies been trading BRF Brasil Foods SA (NYSE:BRFS)?

Heading into the fourth quarter of 2018, a total of 10 of the hedge funds tracked by Insider Monkey held long positions in this stock, no change from one quarter earlier. Below, you can check out the change in hedge fund sentiment towards BRFS over the last 13 quarters. So, let’s see which hedge funds were among the top holders of the stock and which hedge funds were making big moves. 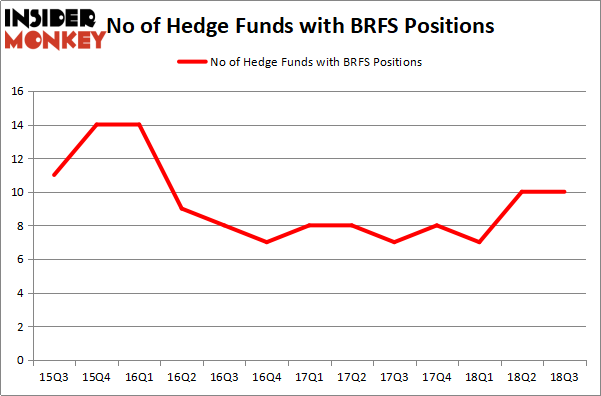 Among these funds, Oaktree Capital Management held the most valuable stake in BRF Brasil Foods SA (NYSE:BRFS), which was worth $28 million at the end of the third quarter. On the second spot was QVT Financial which amassed $7.7 million worth of shares. Moreover, Adage Capital Management, Canyon Capital Advisors, and Blue Mountain Capital were also bullish on BRF Brasil Foods SA (NYSE:BRFS), allocating a large percentage of their portfolios to this stock.

Due to the fact that BRF Brasil Foods SA (NYSE:BRFS) has witnessed declining sentiment from hedge fund managers, it’s safe to say that there was a specific group of hedge funds that slashed their full holdings last quarter. It’s worth mentioning that Matthew Hulsizer’s PEAK6 Capital Management cut the biggest stake of the “upper crust” of funds monitored by Insider Monkey, worth about $0.8 million in call options, and Ken Griffin’s Citadel Investment Group was right behind this move, as the fund cut about $0.1 million worth. These moves are interesting, as aggregate hedge fund interest stayed the same (this is a bearish signal in our experience).

As you can see these stocks had an average of 18.5 hedge funds with bullish positions and the average amount invested in these stocks was $243 million. That figure was $51 million in BRFS’s case. Ciena Corporation (NASDAQ:CIEN) is the most popular stock in this table. On the other hand Life Storage, Inc. (NYSE:LSI) is the least popular one with only 12 bullish hedge fund positions. Compared to these stocks BRF Brasil Foods SA (NYSE:BRFS) is even less popular than LSI. Considering that hedge funds aren’t fond of this stock in relation to other companies analyzed in this article, it may be a good idea to analyze it in detail and understand why the smart money isn’t behind this stock. This isn’t necessarily bad news. Although it is possible that hedge funds may think the stock is overpriced and view the stock as a short candidate, they may not be very familiar with the bullish thesis. In either case more research is warranted.