Here is What Hedge Funds Think About BioScrip Inc. (BIOS)

BioScrip Inc. (NASDAQ:BIOS) was in 18 hedge funds’ portfolios at the end of September. BIOS shareholders have witnessed an increase in activity from the world’s largest hedge funds lately. There were 17 hedge funds in our database with BIOS holdings at the end of the previous quarter. Our calculations also showed that bios isn’t among the 30 most popular stocks among hedge funds.

At Q3’s end, a total of 18 of the hedge funds tracked by Insider Monkey held long positions in this stock, a change of 6% from the second quarter of 2018. By comparison, 18 hedge funds held shares or bullish call options in BIOS heading into this year. With hedgies’ sentiment swirling, there exists a select group of notable hedge fund managers who were adding to their holdings meaningfully (or already accumulated large positions). 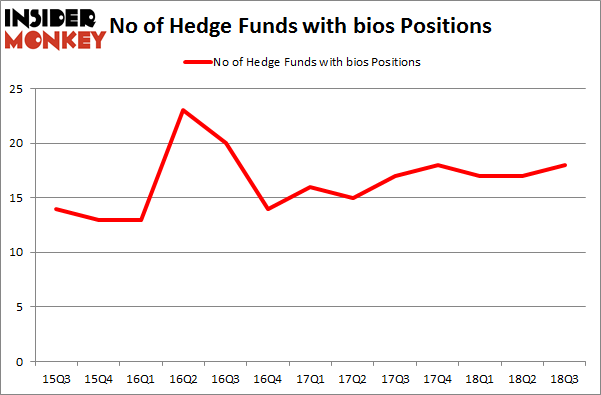 Now, some big names were breaking ground themselves. GLG Partners, managed by Noam Gottesman, created the most valuable position in BioScrip Inc. (NASDAQ:BIOS). GLG Partners had $0.1 million invested in the company at the end of the quarter. Michael Platt and William Reeves’s BlueCrest Capital Mgmt. also initiated a $0 million position during the quarter. The only other fund with a new position in the stock is Gavin Saitowitz and Cisco J. del Valle’s Springbok Capital.

As you can see these stocks had an average of 5 hedge funds with bullish positions and the average amount invested in these stocks was $14 million. That figure was $107 million in BIOS’s case. iRadimed Corporation (NASDAQ:IRMD) is the most popular stock in this table. On the other hand Capital City Bank Group, Inc. (NASDAQ:CCBG) is the least popular one with only 3 bullish hedge fund positions. Compared to these stocks BioScrip Inc. (NASDAQ:BIOS) is more popular among hedge funds. Considering that hedge funds are fond of this stock in relation to its market cap peers, it may be a good idea to analyze it in detail and potentially include it in your portfolio.