Is Banco Bilbao Vizcaya Argentaria SA (ADR) (NYSE:BBVA) a good equity to bet on right now? We like to check what the smart money thinks first before doing extensive research. Although there have been several high profile failed hedge fund picks, the consensus picks among hedge fund investors have historically outperformed the market after adjusting for known risk attributes. It’s not surprising given that hedge funds have access to better information and more resources to find the latest market-moving information.

Banco Bilbao Vizcaya Argentaria SA (ADR) (NYSE:BBVA) registered an increase in hedge fund sentiment last quarter. There were six hedge funds in our database with BBVA holdings at the end of September. At the end of this article we will also compare BBVA to other stocks including T MOBILE US INC (NYSE:TMUS), Becton, Dickinson and Co. (NYSE:BDX), and Northrop Grumman Corporation (NYSE:NOC) to get a better sense of its popularity.

At Q3’s end, a total of six of the hedge funds tracked by Insider Monkey were long this stock, versus three funds at the end of June. By comparison, six hedge funds held shares or bullish call options in BBVA heading into this year. With hedge funds’ capital changing hands, there exists an “upper tier” of noteworthy hedge fund managers who were increasing their holdings substantially (or already accumulated large positions). 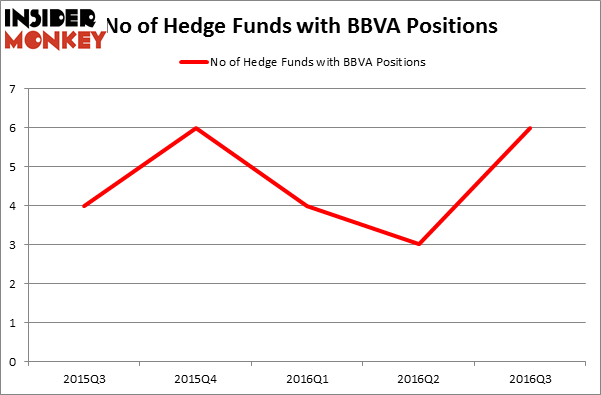 Of the funds tracked by Insider Monkey, Millennium Management, one of the 10 largest hedge funds in the world, holds the number one position in Banco Bilbao Vizcaya Argentaria SA (ADR) (NYSE:BBVA). Millennium Management has a $0.9 million position in the stock. The second most bullish fund manager is Paul Marshall and Ian Wace’s Marshall Wace LLP holding a $0.3 million position. Remaining members of the smart money that hold long positions encompass Mike Vranos’ Ellington, Jim Simons’ Renaissance Technologies, and Matthew Hulsizer’s PEAK6 Capital Management. We should note that none of these hedge funds are among our list of the 100 best performing hedge funds which is based on the performance of their 13F long positions in non-microcap stocks.