Here is What Hedge Funds Think About AutoZone, Inc. (AZO)

Is AutoZone, Inc. (NYSE:AZO) an exceptional investment right now? Investors who are in the know are taking a pessimistic view. The number of bullish hedge fund positions dropped by 2 in recent months. Our calculations also showed that AZO isn’t among the 30 most popular stocks among hedge funds.

What does the smart money think about AutoZone, Inc. (NYSE:AZO)? 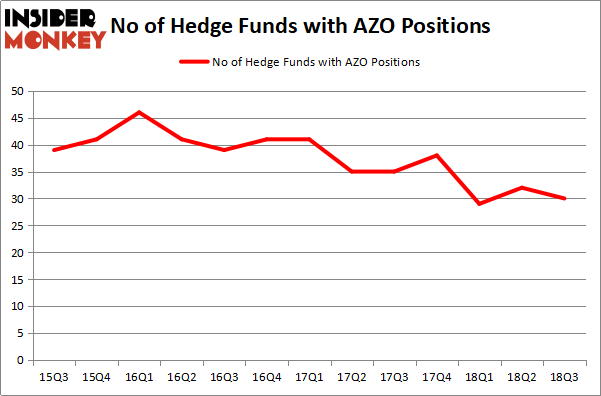 Of the funds tracked by Insider Monkey, Citadel Investment Group, managed by Ken Griffin, holds the number one position in AutoZone, Inc. (NYSE:AZO). Citadel Investment Group has a $254.6 million call position in the stock, comprising 0.1% of its 13F portfolio. Sitting at the No. 2 spot is Arrowstreet Capital, managed by Peter Rathjens, Bruce Clarke and John Campbell, which holds a $250.5 million position; 0.6% of its 13F portfolio is allocated to the company. Remaining professional money managers that are bullish consist of Cliff Asness’s AQR Capital Management, Jim Simons’s Renaissance Technologies and Clint Carlson’s Carlson Capital.

Since AutoZone, Inc. (NYSE:AZO) has experienced a decline in interest from the aggregate hedge fund industry, we can see that there is a sect of funds who sold off their positions entirely by the end of the third quarter. It’s worth mentioning that Paul Marshall and Ian Wace’s Marshall Wace LLP cut the biggest investment of the 700 funds followed by Insider Monkey, worth close to $62.3 million in stock. Gregg Moskowitz’s fund, Interval Partners, also cut its stock, about $55 million worth. These moves are interesting, as total hedge fund interest was cut by 2 funds by the end of the third quarter.

As you can see these stocks had an average of 30 hedge funds with bullish positions and the average amount invested in these stocks was $825 million. That figure was $920 million in AZO’s case. Marathon Oil Corporation (NYSE:MRO) is the most popular stock in this table. On the other hand Arista Networks Inc (NYSE:ANET) is the least popular one with only 22 bullish hedge fund positions. AutoZone, Inc. (NYSE:AZO) is not the least popular stock in this group but hedge fund interest is still below average. This is a slightly negative signal and we’d rather spend our time researching stocks that hedge funds are piling on. In this regard MRO might be a better candidate to consider a long position.