As we already know from media reports and hedge fund investor letters, many hedge funds lost money in October, blaming macroeconomic conditions and unpredictable events that hit several sectors, with healthcare among them. Nevertheless, most investors decided to stick to their bullish theses and their long-term focus allows us to profit from the recent declines. In particular, let’s take a look at what hedge funds think about AU Optronics Corp. (NYSE:AUO) in this article.

AU Optronics Corp. (NYSE:AUO) was in 10 hedge funds’ portfolios at the end of the third quarter of 2018. AUO investors should pay attention to an increase in enthusiasm from smart money in recent months. There were 6 hedge funds in our database with AUO positions at the end of the previous quarter. Our calculations also showed that AUO isn’t among the 30 most popular stocks among hedge funds.

What have hedge funds been doing with AU Optronics Corp. (NYSE:AUO)? 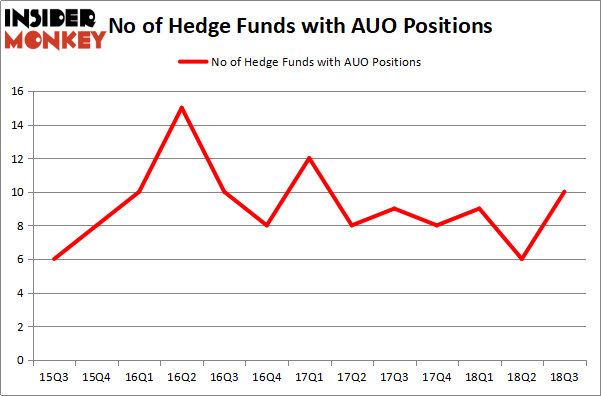 More specifically, Renaissance Technologies was the largest shareholder of AU Optronics Corp. (NYSE:AUO), with a stake worth $51.6 million reported as of the end of September. Trailing Renaissance Technologies was Two Sigma Advisors, which amassed a stake valued at $1.2 million. Citadel Investment Group, Arrowstreet Capital, and D E Shaw were also very fond of the stock, giving the stock large weights in their portfolios.

As you can see these stocks had an average of 19 hedge funds with bullish positions and the average amount invested in these stocks was $354 million. That figure was $56 million in AUO’s case. International Game Technology PLC (NYSE:IGT) is the most popular stock in this table. On the other hand Apple Hospitality REIT Inc (NYSE:APLE) is the least popular one with only 10 bullish hedge fund positions. Compared to these stocks AU Optronics Corp. (NYSE:AUO) is even less popular than APLE. Considering that hedge funds aren’t fond of this stock in relation to other companies analyzed in this article, it may be a good idea to analyze it in detail and understand why the smart money isn’t behind this stock. This isn’t necessarily bad news. Although it is possible that hedge funds may think the stock is overpriced and view the stock as a short candidate, they may not be very familiar with the bullish thesis. In either case more research is warranted.

FutureFuel Corp. (FF): Are Hedge Funds Right About This Stock?
Monthly Newsletter Strategy
Download a free copy of our newsletter and see the details inside!
Hedge Fund Resource Center
Related News
Is AU Optronics Corp (ADR) (AUO) Going to Burn These Hedge Funds? What Stands Behind These Stocks’ Bullish Moves Today? Is AU Optronics Corp. (ADR) (AUO) A Good Stock To Buy? Segantii Capital and Billionaires are Betting On These Stocks Hedge Funds Are Betting On STMicroelectronics N.V. (ADR) (STM) Do Hedge Funds and Insiders Love ON Semiconductor Corp (ONNN)? Maxim Integrated Products Inc. (MXIM): Hedge Funds Are Bullish and Insiders Are Undecided, What Should You Do? 11 Best Inexpensive Bourbons Under $25 That Don’t Taste Cheap 10 Best Vacation Spots for Singles in Their 40’s 15 Highest Paid YouTubers of 2018
Billionaire Hedge Funds