There are several ways to beat the market, and investing in small cap stocks has historically been one of them. We like to improve the odds of beating the market further by examining what famous hedge fund operators such as Carl Icahn and George Soros think. Those hedge fund operators make billions of dollars each year by hiring the best and the brightest to do research on stocks, including small cap stocks that big brokerage houses simply don’t cover. Because of Carl Icahn and other elite funds’ exemplary historical records, we pay attention to their small cap picks. In this article, we use hedge fund filing data to analyze Alcoa Corporation (NYSE:AA).

Alcoa Corporation (NYSE:AA) investors should be aware of an increase in hedge fund sentiment of late. AA was in 38 hedge funds’ portfolios at the end of September. There were 32 hedge funds in our database with AA holdings at the end of the previous quarter. Our calculations also showed that AA isn’t among the 30 most popular stocks among hedge funds.

Today there are tons of metrics investors employ to size up publicly traded companies. Two of the less utilized metrics are hedge fund and insider trading sentiment. Our researchers have shown that, historically, those who follow the best picks of the best hedge fund managers can trounce the S&P 500 by a solid margin (see the details here).

What does the smart money think about Alcoa Corporation (NYSE:AA)?

At the end of the third quarter, a total of 38 of the hedge funds tracked by Insider Monkey were long this stock, a change of 19% from the previous quarter. On the other hand, there were a total of 37 hedge funds with a bullish position in AA at the beginning of this year. With hedgies’ sentiment swirling, there exists an “upper tier” of key hedge fund managers who were upping their holdings meaningfully (or already accumulated large positions). 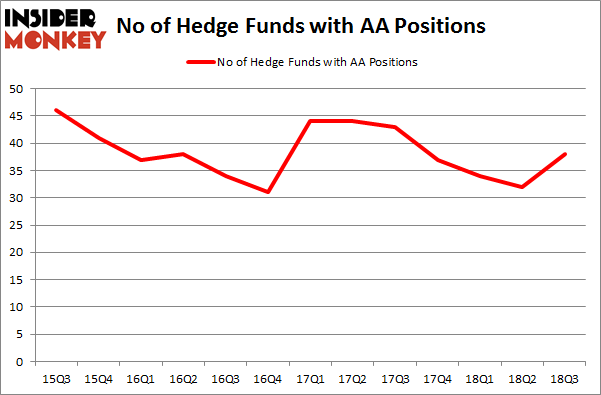 As aggregate interest increased, specific money managers have been driving this bullishness. Castle Hook Partners, managed by Josh Donfeld and David Rogers, assembled the most valuable position in Alcoa Corporation (NYSE:AA). Castle Hook Partners had $62.4 million invested in the company at the end of the quarter. Josh Donfeld and David Rogers’s Castle Hook Partners also made a $40.4 million investment in the stock during the quarter. The other funds with brand new AA positions are Don Morgan’s Brigade Capital, Dmitry Balyasny’s Balyasny Asset Management, and Alexander Mitchell’s Scopus Asset Management.

As you can see these stocks had an average of 25.75 hedge funds with bullish positions and the average amount invested in these stocks was $876 million. That figure was $1.08 billion in AA’s case. Zendesk Inc (NYSE:ZEN) is the most popular stock in this table. On the other hand Telecom Argentina S.A. (NYSE:TEO) is the least popular one with only 9 bullish hedge fund positions. Alcoa Corporation (NYSE:AA) is not the most popular stock in this group but hedge fund interest is still above average. This is a slightly positive signal but we’d rather spend our time researching stocks that hedge funds are piling on. In this regard ZEN might be a better candidate to consider a long position.