Our extensive research has shown that imitating the smart money can generate significant returns for retail investors, which is why we track more than 700 prominent money managers and analyze their quarterly 13F filings. The stocks that are heavily bought by hedge funds historically outperformed the market, though there is no shortage of high profile failures like hedge funds’ recent losses in Facebook. Let’s take a closer look at what the funds we track think about ADMA Biologics Inc (NASDAQ:ADMA) in this article.

ADMA Biologics Inc (NASDAQ:ADMA) shareholders have witnessed a decrease in enthusiasm from smart money of late. Our calculations also showed that ADMA isn’t among the 30 most popular stocks among hedge funds. 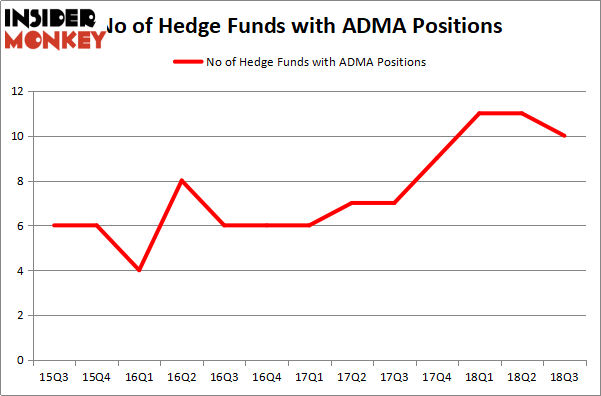 More specifically, Perceptive Advisors was the largest shareholder of ADMA Biologics Inc (NASDAQ:ADMA), with a stake worth $40.5 million reported as of the end of September. Trailing Perceptive Advisors was Consonance Capital Management, which amassed a stake valued at $28.2 million. Broadfin Capital, Aisling Capital, and 683 Capital Partners were also very fond of the stock, giving the stock large weights in their portfolios.

We view hedge fund activity in the stock unfavorable, but in this case there was only a single hedge fund selling its entire position: Millennium Management. One hedge fund selling its entire position doesn’t always imply a bearish intent. Theoretically a hedge fund may decide to sell a promising position in order to invest the proceeds in a more promising idea. However, we don’t think this is the case in this case because none of the 700+ hedge funds tracked by Insider Monkey identified ADMA as a viable investment and initiated a position in the stock.

As you can see these stocks had an average of 5.75 hedge funds with bullish positions and the average amount invested in these stocks was $21 million. That figure was $130 million in ADMA’s case. CRH Medical Corporation (NYSE:CRHM) is the most popular stock in this table. On the other hand WhiteHorse Finance, Inc. (NASDAQ:WHF) is the least popular one with only 2 bullish hedge fund positions. Compared to these stocks ADMA Biologics Inc (NASDAQ:ADMA) is more popular among hedge funds. Considering that hedge funds are fond of this stock in relation to its market cap peers, it may be a good idea to analyze it in detail and potentially include it in your portfolio.