Here is What Hedge Funds Think About Adecoagro SA (AGRO)

The latest 13F reporting period has come and gone, and Insider Monkey is again at the forefront when it comes to making use of this gold mine of data. We have processed the filings of the more than 700 world-class investment firms that we track and now have access to the collective wisdom contained in these filings, which are based on their September 30 holdings, data that is available nowhere else. Should you consider Adecoagro SA (NYSE:AGRO) for your portfolio? We’ll look to this invaluable collective wisdom for the answer.

Is Adecoagro SA (NYSE:AGRO) a buy here? The smart money is reducing their bets on the stock. The number of long hedge fund bets went down by 1 in recent months. Our calculations also showed that AGRO isn’t among the 30 most popular stocks among hedge funds. AGRO was in 16 hedge funds’ portfolios at the end of September. There were 17 hedge funds in our database with AGRO positions at the end of the previous quarter.

In the eyes of most market participants, hedge funds are perceived as underperforming, outdated financial vehicles of the past. While there are greater than 8,000 funds with their doors open at present, We hone in on the crème de la crème of this group, around 700 funds. It is estimated that this group of investors oversee the majority of all hedge funds’ total asset base, and by watching their best equity investments, Insider Monkey has uncovered a number of investment strategies that have historically surpassed the broader indices. Insider Monkey’s flagship hedge fund strategy outperformed the S&P 500 index by 6 percentage points annually since its inception in May 2014 through early November 2018. We were able to generate large returns even by identifying short candidates. Our portfolio of short stocks lost 24% since February 2017 (through December 3rd) even though the market was up nearly 23% during the same period. We just shared a list of 11 short targets in our latest quarterly update.

What have hedge funds been doing with Adecoagro SA (NYSE:AGRO)?

Heading into the fourth quarter of 2018, a total of 16 of the hedge funds tracked by Insider Monkey were long this stock, a change of -6% from the previous quarter. On the other hand, there were a total of 16 hedge funds with a bullish position in AGRO at the beginning of this year. With hedge funds’ capital changing hands, there exists an “upper tier” of key hedge fund managers who were adding to their holdings significantly (or already accumulated large positions). 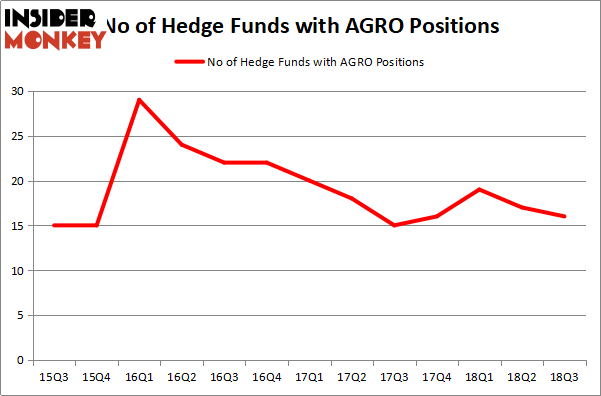 When looking at the institutional investors followed by Insider Monkey, Edmond M. Safra’s EMS Capital has the most valuable position in Adecoagro SA (NYSE:AGRO), worth close to $74 million, amounting to 5.5% of its total 13F portfolio. The second largest stake is held by Route One Investment Company, led by William Duhamel, holding a $60.6 million position; 2% of its 13F portfolio is allocated to the company. Some other peers with similar optimism consist of Zach Schreiber’s Point State Capital, Steve Cohen’s Point72 Asset Management and D. E. Shaw’s D E Shaw.

Judging by the fact that Adecoagro SA (NYSE:AGRO) has witnessed falling interest from the entirety of the hedge funds we track, we can see that there is a sect of funds that elected to cut their full holdings by the end of the third quarter. It’s worth mentioning that James Dondero’s Highland Capital Management dropped the largest investment of all the hedgies followed by Insider Monkey, comprising about $1.8 million in stock. Peter Muller’s fund, PDT Partners, also cut its stock, about $1.1 million worth. These transactions are intriguing to say the least, as aggregate hedge fund interest fell by 1 funds by the end of the third quarter.

As you can see these stocks had an average of 8.75 hedge funds with bullish positions and the average amount invested in these stocks was $64 million. That figure was $189 million in AGRO’s case. Comtech Telecommunications Corp. (NASDAQ:CMTL) is the most popular stock in this table. On the other hand Partner Communications Company Ltd (NASDAQ:PTNR) is the least popular one with only 2 bullish hedge fund positions. Compared to these stocks Adecoagro SA (NYSE:AGRO) is more popular among hedge funds. Considering that hedge funds are fond of this stock in relation to its market cap peers, it may be a good idea to analyze it in detail and potentially include it in your portfolio.