Hedge fund managers like David Einhorn, Dan Loeb, or Carl Icahn became billionaires through reaping large profits for their investors, which is why piggybacking their stock picks may provide us with significant returns as well. Many hedge funds, like Paul Singer’s Elliott Management, are pretty secretive, but we can still get some insights by analyzing their quarterly 13F filings. One of the most fertile grounds for large abnormal returns is hedge funds’ most popular small-cap picks, which are not so widely followed and often trade at a discount to their intrinsic value. In this article we will check out hedge fund activity in another small-cap stock: Acacia Communications, Inc. (NASDAQ:ACIA).

Acacia Communications, Inc. (NASDAQ:ACIA) investors should be aware of an increase in enthusiasm from smart money recently. Our calculations also showed that acia isn’t among the 30 most popular stocks among hedge funds.

What have hedge funds been doing with Acacia Communications, Inc. (NASDAQ:ACIA)?

At Q3’s end, a total of 17 of the hedge funds tracked by Insider Monkey were long this stock, a change of 55% from the previous quarter. On the other hand, there were a total of 10 hedge funds with a bullish position in ACIA at the beginning of this year. With hedgies’ sentiment swirling, there exists a select group of notable hedge fund managers who were boosting their holdings meaningfully (or already accumulated large positions). 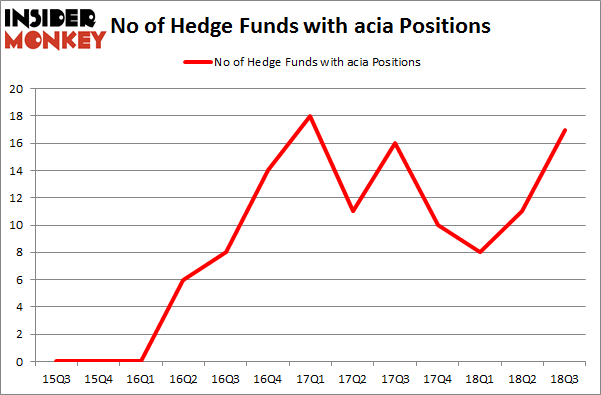 As you can see these stocks had an average of 12.75 hedge funds with bullish positions and the average amount invested in these stocks was $87 million. That figure was $64 million in ACIA’s case. Big Lots, Inc. (NYSE:BIG) is the most popular stock in this table. On the other hand Bitauto Hldg Ltd (NYSE:BITA) is the least popular one with only 7 bullish hedge fund positions. Acacia Communications, Inc. (NASDAQ:ACIA) is not the most popular stock in this group but hedge fund interest is still above average. This is a slightly positive signal but we’d rather spend our time researching stocks that hedge funds are piling on. In this regard BIG might be a better candidate to consider a long position.

Should You Buy Genomic Health, Inc. (GHDX)?
Monthly Newsletter Strategy
Download a free copy of our newsletter and see the details inside!
Hedge Fund Resource Center
Related News
Exelixis, Symantec, Weight Watchers International and More: Here’s Why These Stocks Are Moving Markets Snapshot: 35 Major Stories About The Financial Markets Today Is Acacia Communications, Inc. (ACIA) a Good Stock to Buy? Acacia Communications, Inc. (ACIA) Stock: Reaching For The Stars | Here’s Why! How the Market is Reacting To Acacia, iRobot, Fitbit, and More Today Why Are Traders Piling Into These Five Stocks? Here’s Why These Five Stocks Are in the Red Today: Clovis Oncology, Tyson Foods, Lloyds Banking Group, and More 11 Countries With The Worst Modern Music In The World The Top 5 Robo Advisor Apps of 2018 Five Reasons You Need a Day-Trading Mentor
Billionaire Hedge Funds