Tempur Sealy International Inc. (NYSE:TPX) was in 29 hedge funds’ portfolios at the end of the first quarter of 2019. TPX has seen a decrease in support from the world’s most elite money managers recently. There were 31 hedge funds in our database with TPX holdings at the end of the previous quarter. Our calculations also showed that TPX isn’t among the 30 most popular stocks among hedge funds. However, we need to compare these numbers to other similarly valued stocks’ statistics to understand what hedge funds really think about TPX>

At the end of the first quarter, a total of 29 of the hedge funds tracked by Insider Monkey held long positions in this stock, a change of -6% from the fourth quarter of 2018. The graph below displays the number of hedge funds with bullish position in TPX over the last 15 quarters. With hedge funds’ positions undergoing their usual ebb and flow, there exists an “upper tier” of noteworthy hedge fund managers who were adding to their holdings considerably (or already accumulated large positions). 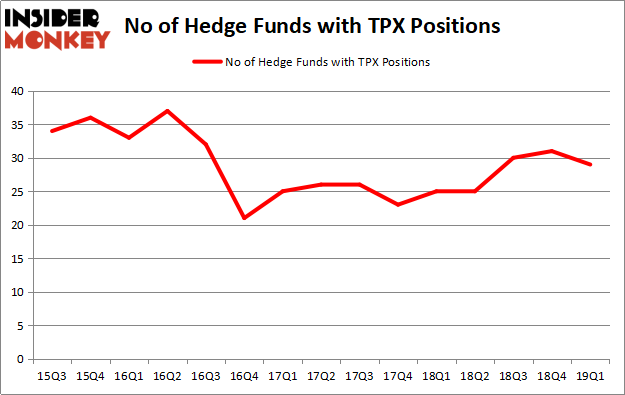 The largest stake in Tempur Sealy International Inc. (NYSE:TPX) was held by H Partners Management, which reported holding $461.4 million worth of stock at the end of March. It was followed by Route One Investment Company with a $246.5 million position. Other investors bullish on the company included Centerbridge Partners, Manor Road Capital Partners, and Scopus Asset Management.

Because Tempur Sealy International Inc. (NYSE:TPX) has experienced a decline in interest from the aggregate hedge fund industry, it’s easy to see that there lies a certain “tier” of fund managers that slashed their full holdings by the end of the third quarter. At the top of the heap, Steven Boyd’s Armistice Capital sold off the biggest stake of the 700 funds tracked by Insider Monkey, comprising an estimated $34.1 million in stock, and Derek C. Schrier’s Indaba Capital Management was right behind this move, as the fund said goodbye to about $25.8 million worth. These moves are intriguing to say the least, as total hedge fund interest was cut by 2 funds by the end of the third quarter.

As you can see these stocks had an average of 18.75 hedge funds with bullish positions and the average amount invested in these stocks was $206 million. That figure was $1176 million in TPX’s case. Urban Outfitters, Inc. (NASDAQ:URBN) is the most popular stock in this table. On the other hand UMB Financial Corporation (NASDAQ:UMBF) is the least popular one with only 9 bullish hedge fund positions. Compared to these stocks Tempur Sealy International Inc. (NYSE:TPX) is more popular among hedge funds. Our calculations showed that top 20 most popular stocks among hedge funds returned 6.2% in Q2 through June 19th and outperformed the S&P 500 ETF (SPY) by nearly 3 percentage points. Hedge funds were also right about betting on TPX as the stock returned 24.9% during the same period and outperformed the market by an even larger margin. Hedge funds were clearly right about piling into this stock relative to other stocks with similar market capitalizations.