Is Alphabet Inc (NASDAQ:GOOG) a good stock to buy right now? We at Insider Monkey like to examine what billionaires and hedge funds think of a company before doing days of research on it. Given their 2 and 20 payment structure, hedge funds have more incentives and resources than the average investor. The funds have access to expert networks and get tips from industry insiders. They also have numerous Ivy League graduates and MBAs. Like everyone else, hedge funds perform miserably at times, but their consensus picks have historically outperformed the market after risk adjustments.

What do hedge funds think about Alphabet Inc (NASDAQ:GOOG)? The latest 13F filings show that the smart money is becoming less confident. The number of bullish hedge fund bets shrunk by 8 lately. This is a bearish signal on the margin, but, overall, our calculations showed that GOOG ranked 5th among the 30 most popular stocks among hedge funds. GOOG was in 133 hedge funds’ portfolios at the end of the first quarter of 2019. There were 141 hedge funds in our database with GOOG holdings at the end of the previous quarter.

GOOG is the 5th most popular hedge fund stock but Alphabet Inc is really the most popular company among hedge funds. That’s because some hedge funds invest in GOOG shares whereas others prefer GOOGL shares to bet on Alphabet. There were a total of 216 hedge funds with bullish bets on either GOOG or GOOGL shares at the end of the first quarter. This makes Alphabet the #1 stock among nearly 750 equity hedge funds tracked by Insider Monkey, putting Alphabet ahead of Facebook Inc (NASDAQ:FB), Microsoft Corporation (NASDAQ:MSFT), and Amazon.com Inc. (NASDAQ:AMZN). Nearly 3 out of every 10 hedge fund managers believe Alphabet is a good stock to buy. 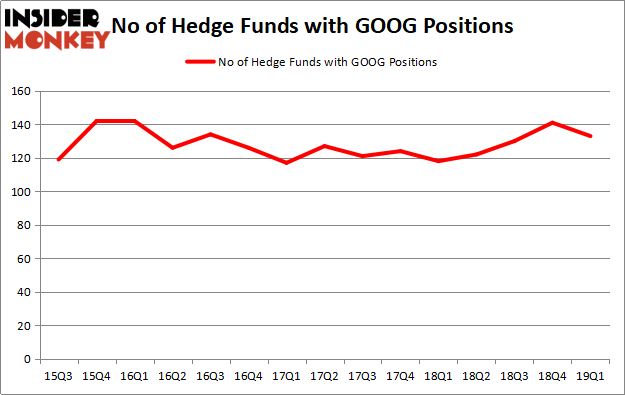 The largest stake in Alphabet Inc (NASDAQ:GOOG) was held by Eagle Capital Management, which reported holding $2093.5 million worth of stock at the end of March. It was followed by Generation Investment Management with a $927.9 million position. Other investors bullish on the company included Egerton Capital Limited, Citadel Investment Group, and AQR Capital Management.

Because Alphabet Inc (NASDAQ:GOOG) has experienced a decline in interest from the smart money, we can see that there lies a certain “tier” of hedge funds who sold off their full holdings in the third quarter. Interestingly, John H. Scully’s SPO Advisory Corp dumped the biggest position of the “upper crust” of funds followed by Insider Monkey, totaling an estimated $316.4 million in stock, and Andrew Hahn’s Ursa Fund Management was right behind this move, as the fund dumped about $272.4 million worth. These moves are intriguing to say the least, as aggregate hedge fund interest was cut by 8 funds in the third quarter.

As you can see these stocks had an average of 113.25 hedge funds with bullish positions and the average amount invested in these stocks was $14544 million. That figure was $13598 million in GOOG’s case. Facebook Inc (NASDAQ:FB) is the most popular stock in this table. On the other hand Johnson & Johnson (NYSE:JNJ) is the least popular one with only 69 bullish hedge fund positions. Alphabet Inc (NASDAQ:GOOG) is not the most popular stock in this group but that’s only because hedge funds usually invest in either GOOG or GOOGL shares.

Our calculations showed that top 20 most popular stocks among hedge funds returned 1.9% in Q2 through May 30th and outperformed the S&P 500 ETF (SPY) by more than 3 percentage points. Unfortunately GOOG wasn’t nearly as successful as these 20 stocks and hedge funds that were betting on GOOG were disappointed as the stock returned -4.7% during the same period and underperformed the market. We believe this is a temporary underperformance. Google has consistently been among the 5 most popular hedge fund stocks since we started tracking this statistics in 2012 and Google outperformed the market by a large margin since then. Hedge funds clearly know what they are doing when it comes to investing in Google. We think the recent weakness in tech giants represents a buying opportunity relative to investing in index funds.