Does ServiceNow Inc (NYSE:NOW) represent a good buying opportunity at the moment? Let’s quickly check the hedge fund interest towards the company and compare it against its peers like Norfolk Southern Corp. (NYSE:NSC), Prudential Public Limited Company (NYSE:PUK), Micron Technology, Inc. (NASDAQ:MU), and Schlumberger Limited. (NYSE:SLB). Hedge fund firms constantly search out bright intellectuals and highly-experienced employees and throw away millions of dollars on satellite photos and other research activities, so it is no wonder why they tend to generate millions in profits each year. It is also true that some hedge fund players fail inconceivably on some occasions, but net net their stock picks have been generating superior risk-adjusted returns on average over the years.

Is ServiceNow Inc (NYSE:NOW) worth your attention right now? Hedge funds are becoming more confident. The number of bullish hedge fund positions went up by 9 lately. Our calculations also showed that NOW ranked 20th overall among the 30 most popular stocks among hedge funds. NOW was in 86 hedge funds’ portfolios at the end of September. There were 77 hedge funds in our database with NOW holdings at the end of the previous quarter.

Unlike the largest US hedge funds that are convinced Dow will soar past 40,000 or the world’s most bearish hedge fund that’s more convinced than ever that a crash is coming, our long-short investment strategy doesn’t rely on bull or bear markets to deliver double digit returns. We only rely on the best performing hedge funds‘ buy/sell signals. Let’s check out the recent hedge fund action regarding ServiceNow Inc (NYSE:NOW).

What does smart money think about ServiceNow Inc (NYSE:NOW)? 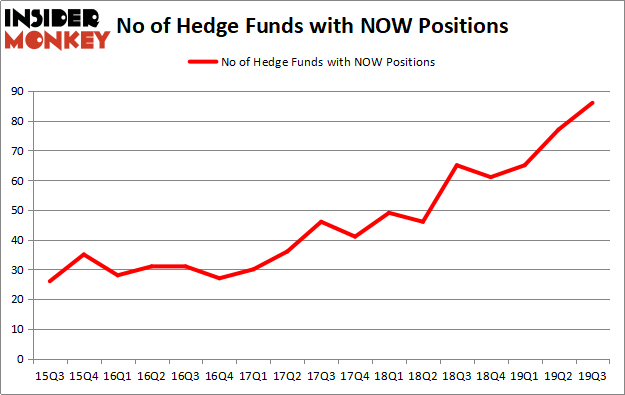 Among these funds, Coatue Management held the most valuable stake in ServiceNow Inc (NYSE:NOW), which was worth $690 million at the end of the third quarter. On the second spot was Melvin Capital Management which amassed $529.4 million worth of shares. Viking Global, Lone Pine Capital, and Two Sigma Advisors were also very fond of the stock, becoming one of the largest hedge fund holders of the company. In terms of the portfolio weights assigned to each position Praesidium Investment Management allocated the biggest weight to ServiceNow Inc (NYSE:NOW), around 10.44% of its portfolio. SCGE Management is also relatively very bullish on the stock, dishing out 9.31 percent of its 13F equity portfolio to NOW.

With a general bullishness amongst the heavyweights, specific money managers have been driving this bullishness. Viking Global, managed by Andreas Halvorsen, established the biggest position in ServiceNow Inc (NYSE:NOW). Viking Global had $449.5 million invested in the company at the end of the quarter. Gabriel Plotkin’s Melvin Capital Management also made a $304.6 million investment in the stock during the quarter. The other funds with brand new NOW positions are Josh Resnick’s Jericho Capital Asset Management, Aaron Cowen’s Suvretta Capital Management, and Brett Barakett’s Tremblant Capital.

As you can see these stocks had an average of 43.25 hedge funds with bullish positions and the average amount invested in these stocks was $1718 million. That figure was $5264 million in NOW’s case. Micron Technology, Inc. (NASDAQ:MU) is the most popular stock in this table. On the other hand Prudential Public Limited Company (NYSE:PUK) is the least popular one with only 11 bullish hedge fund positions. Compared to these stocks ServiceNow Inc (NYSE:NOW) is more popular among hedge funds. Our calculations showed that top 20 most popular stocks among hedge funds returned 34.7% in 2019 through November 22nd and outperformed the S&P 500 ETF (SPY) by 8.5 percentage points. Hedge funds were also right about betting on NOW as the stock returned 10.3% during Q4 (through 11/22) and outperformed the market by an even larger margin. Hedge funds were clearly right about piling into this stock relative to other stocks with similar market capitalizations.