Here is the 15th Most Popular Stock Among Hedge Funds

Many investors, including Paul Tudor Jones or Stan Druckenmiller, have been saying before the Q4 market crash that the stock market is overvalued due to a low interest rate environment that leads to companies swapping their equity for debt and focusing mostly on short-term performance such as beating the quarterly earnings estimates. In the first quarter, most investors recovered all of their Q4 losses as sentiment shifted and optimism dominated the US China trade negotiations. Nevertheless, many of the stocks that delivered strong returns in the first quarter still sport strong fundamentals and their gains were more related to the general market sentiment rather than their individual performance and hedge funds kept their bullish stance. In this article we will find out how hedge fund sentiment to salesforce.com, inc. (NYSE:CRM) changed recently.

We’re going to take a glance at the latest hedge fund action regarding salesforce.com, inc. (NYSE:CRM).

At the end of the first quarter, a total of 93 of the hedge funds tracked by Insider Monkey were long this stock, a change of -6% from the fourth quarter of 2018. The graph below displays the number of hedge funds with bullish position in CRM over the last 15 quarters. With the smart money’s sentiment swirling, there exists a few notable hedge fund managers who were upping their holdings substantially (or already accumulated large positions). 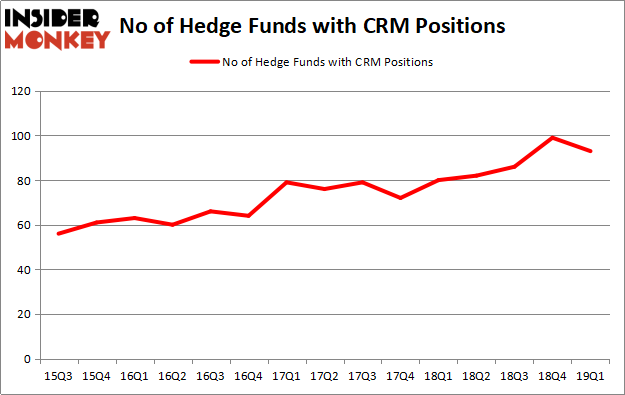 According to publicly available hedge fund and institutional investor holdings data compiled by Insider Monkey, Fisher Asset Management, managed by Ken Fisher, holds the most valuable position in salesforce.com, inc. (NYSE:CRM). Fisher Asset Management has a $467.9 million position in the stock, comprising 0.6% of its 13F portfolio. Sitting at the No. 2 spot is Citadel Investment Group, led by Ken Griffin, holding a $378.2 million position; the fund has 0.2% of its 13F portfolio invested in the stock. Some other members of the smart money that hold long positions encompass Chase Coleman’s Tiger Global Management LLC, Eashwar Krishnan’s Tybourne Capital Management and Stephen Mandel’s Lone Pine Capital.

Due to the fact that salesforce.com, inc. (NYSE:CRM) has witnessed a decline in interest from the aggregate hedge fund industry, it’s safe to say that there lies a certain “tier” of hedge funds that slashed their positions entirely by the end of the third quarter. Intriguingly, Andreas Halvorsen’s Viking Global dropped the biggest investment of the “upper crust” of funds monitored by Insider Monkey, comprising an estimated $708.8 million in stock, and Scott Ferguson’s Sachem Head Capital was right behind this move, as the fund said goodbye to about $230.8 million worth. These transactions are intriguing to say the least, as total hedge fund interest was cut by 6 funds by the end of the third quarter.

As you can see these stocks had an average of 46.75 hedge funds with bullish positions and the average amount invested in these stocks was $1648 million. That figure was $5226 million in CRM’s case. Paypal Holdings Inc (NASDAQ:PYPL) is the most popular stock in this table. On the other hand PetroChina Company Limited (NYSE:PTR) is the least popular one with only 12 bullish hedge fund positions. salesforce.com, inc. (NYSE:CRM) is not the most popular stock in this group but hedge fund interest is still above average. This is a slightly positive signal but we’d rather spend our time researching stocks that hedge funds are piling on. Our calculations showed that top 10 most popular stocks among hedge funds returned 2.2% in Q2 through May 30th and outperformed the S&P 500 ETF (SPY) by more than 3 percentage points. Unfortunately CRM wasn’t nearly as popular as these 10 stocks and hedge funds that were betting on CRM were disappointed as the stock returned -1.7% during the same period and underperformed the market by a small margin. If you are interested in investing in large cap stocks with huge upside potential, you should check out the top 10 most popular stocks among hedge funds as 7 of these stocks already outperformed the market in Q2.