It’s not that easy being Bill Ackman.

Whether it was calling out Herbalife Ltd. (NYSE:HLF) as a “pyramid scheme” or spinning off Tim Hortons Inc. (USA) (NYSE:THI) from The Wendy’s Company (NASDAQ:WEN), every big move he has made recently has been under the microscope. Now that he has announced that he will leave J.C. Penney Company, Inc. (NYSE:JCP)‘s board of directors to follow some of the men he brought with him, one has to wonder if everything he touches is poison.

Or is he actually smarter than we think he is?

Maybe not Ponzi, but definitely odd

A lot has been said about Herbalife Ltd. (NYSE:HLF)’s rather odd way of rewarding investors with an investment structure yielding fantastic numbers, but some call it a “pyramid scheme.” Mr. Ackman was one of the company’s most vocal critics after he sold his Herbalife stock, saying that it was worth nothing. Manwhile, Carl Icahn, an Herbalife supporter, openly argued for the company in January in a 30-minute long CNBC segment that was more a clash of egos than a sound defense of Herbalife.

Considering the 33% rise in Herbalife Ltd. (NYSE:HLF) shares since Ackman shorted the company in May, he may have made a mistake. When looking over Herbalife’s financials, however, one can’t help but think there is something wrong.

Herbalife Ltd. (NYSE:HLF) reports a year-over-year quarterly revenue growth of 18.1% for the trailing 12 months, with an 11.3% profit margin. This wouldn’t be suspicious on its own, but given its astronomical return on equity of 141.8%, it does seem odd. That’s because 2012 equity of $420.8 million is balanced against $477.19 million in net income. 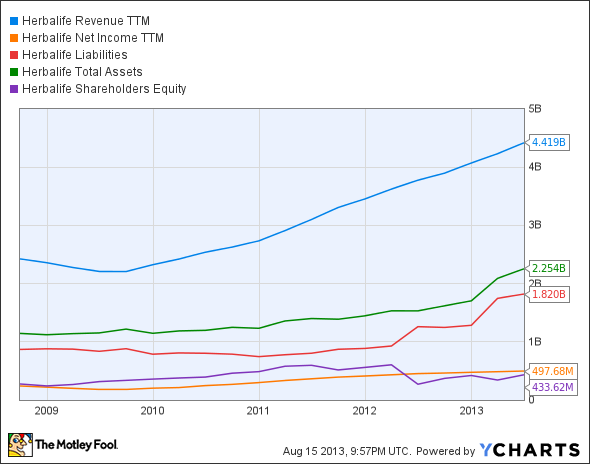 It turns out that 75% of Herbalife’s assets are liabilities and debt (link opens PDF) following a 2011 long-term debt refinancing agreement. This isn’t what you want to see from a multinational company trying to regain a sense of legitimacy.

The high liability levels will soon have to be paid off. With only $477 million per year in net income (which is up 15% from 2011) to counter a 33% growth in liabilities, the recent surge may not be as stable as Mr. Ichan hopes. Herbalife Ltd. (NYSE:HLF) will need higher net income levels to decrease its liabilities and stay out of trouble.

Ackman was also criticized for sinking The Wendy’s Company (NASDAQ:WEN)’s by spinning off Tim Hortons Inc. (USA) (NYSE:THI)’s as its own IPO, supposedly depriving Wendy’s of a key revenue source. Wendy’s stock price since the 2006 split dropped 58.6%, while Tim Horton’s has doubled in value. Ackman attributes Wendy’s poor performance to its CEO, while investors pin it on Ackman.

The Wendy’s Company (NASDAQ:WEN)’s drop has little to do with Ackman’s decision. Revenue and net income growth got a boost in 2009 thanks to the inclusion of burgers like the Baconator and premium coffee drinks, leading to a doubling of Wendy’s yearly revenue from $1.5 billion to $2.5 billion over the year.

Tim Hortons Inc. (USA) (NYSE:THI)’s has a more efficient business model that nets a 15% quarterly profit margin compared to about 2% for The Wendy’s Company (NASDAQ:WEN)’s, largely due to the higher costs of fresh food. That’s good for consumers but not so good for investors, and it leaves Wendy’s more prone to market downturns than Tim Horton’s.

The Wendy’s Company (NASDAQ:WEN)’s has made a bit of a run the last month with strong sales from the heavily promoted Pretzel Bacon Cheeseburger, and the company’s stock may hit $10 per share if profit margins can improve with the sales boost. The Tim Hortons Inc. (USA) (NYSE:THI)’s spinoff revealed Wendy’s hidden problems with turning sales to profits, causing the drop in price more than any action by Ackman.

So what does this mean for J.C. Penney?

J.C. Penney Company, Inc. (NYSE:JCP) has been struggling for a while with its inability to register profits or improve sales, which may explain Ackman’s decision to skip town before the second-quarter earnings report came out.