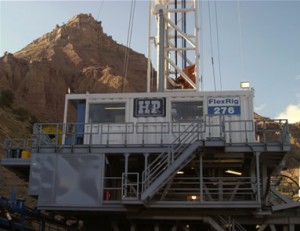 Over the last five years, the Oil & Gas Drilling and Exploration industry has experienced growth in spite of the recession. According to IBISWorld’s data, the industry has experienced an annual growth rate of 2.8% from 2008. Oil companies, on the other side, are spending hoards of cash to keep pace with this growth and maintain their market share. According to the Guggenheim Securities Data, the average amount spent by these companies last year was 43% more than their normal cash flow. I will be discussing three such companies here, which are gaining traction from new contracts.

Helmerich & Payne, Inc. (NYSE:HP) declared impressive results for the second quarter of 2013, where it posted revenue of $838.3 million, up 8.9% year over year and ahead of the consensus estimate of $823 million. The earnings per share reported was $1.39, up 20.3% from the year ago period. These profits were led by better drilling activities around the quarter and innovation in the technological applications.

Helmerich & Payne, Inc. (NYSE:HP) has a proven track record of signing long-term contracts on its AC drive FlexRigs. It recently announced two agreements with an exploration and production company in the U.S. to build and operate two additional FlexRigs. It also signed an agreement to build a 3,000 horsepower AC drive rig, which is scheduled to begin operation in mid-2014 in Columbia.

These three rigs have multi-year contracts and will increase earnings per share to $5.55 per share in the current fiscal year. The higher earnings expectations are also estimated by looking at the increasing demand of the rigs in the dry gas basins. Dry gas basins are those basins which produce methane gas only.

Helmerich & Payne, Inc. (NYSE:HP) is currently producing two rigs per month to meet the new contract commitments, as it expects the demand of rigs is likely to increase later this year. Although it has 21 high-end AC drive FlexRigs currently idle, it’s anticipating that these rigs will be occupied as the demand rises.

The company is currently working on its fleet renewal strategy, which includes production of new drilling units and upgrading older drilling units. It entered into two contracts of three years each with Plains Exploration & Production for its two new ultra deepwater drill ships, the Noble Sam Croft and the Noble Corporation (NYSE:NE) Tom Madden. Both of them are under construction at the Hyundai Heavy Industries shipyard in Ulsan,South Korea, and will operate in the U.S.Gulf of Mexico region.

The deliveries of these drill ships are scheduled for the second quarter of 2014 and the second half of 2014, respectively. Each drill ship will generate revenue of about $693 million over the three year contract. Additionally, it has to deliver 11 rigs over the next two years under contracts signed in the past. This will boost the company’s cash flow over a longer period as the industry expects 50-70 new rig opportunities in the next seven years.

In its fleet renewal strategy, Noble Corporation (NYSE:NE) is working on reducing the unplanned downtime, which is the main concern of lower revenue generation. The company has already reduced it to 5% in the first quarter from 7% in the fourth quarter of 2012. It is further planning to reduce it to 4%-4.5% in 2013. I believe this will increase Noble Corporation (NYSE:NE)’s revenue and overall profit this year.

Diamond Offshore Drilling Inc (NYSE:DO) recently posted first-quarter earnings for this fiscal year, in which it earned net income of $176 million. The company is on the growth path as it has bagged many contracts for its offshore well drillings.