The fourth quarter was a rough one for most investors, as fears of a rising interest rate environment in the U.S, a trade war with China, and a more or less stagnant Europe, weighed heavily on the minds of investors. Both the S&P 500 and Russell 2000 sank as a result, with the Russell 2000, which is composed of smaller companies, being hit especially hard. This was primarily due to hedge funds, which are big supporters of small-cap stocks, pulling some of their capital out of the volatile markets during this time.

Esterline Technologies Corporation (NYSE:ESL) was an exception as the shares jumped from $89 to $117 after Transdigm announced the purchase of ESL for $122.50 per share in cash. Especially hedge funds made out like bandits from this investment.

According to most stock holders, hedge funds are perceived as unimportant, outdated financial tools of yesteryear. While there are over 8000 funds in operation at the moment, Our researchers choose to focus on the top tier of this group, around 700 funds. These hedge fund managers administer most of the hedge fund industry’s total capital, and by keeping an eye on their finest stock picks, Insider Monkey has discovered a few investment strategies that have historically outstripped the S&P 500 index. Insider Monkey’s flagship hedge fund strategy outpaced the S&P 500 index by 6 percentage points a year since its inception in May 2014 through early November 2018. We were able to generate large returns even by identifying short candidates. Our portfolio of short stocks lost 26.1% since February 2017 even though the market was up nearly 19% during the same period. We just shared a list of 11 short targets in our latest quarterly update.

What did the smart money think about Esterline Technologies Corporation (NYSE:ESL)? 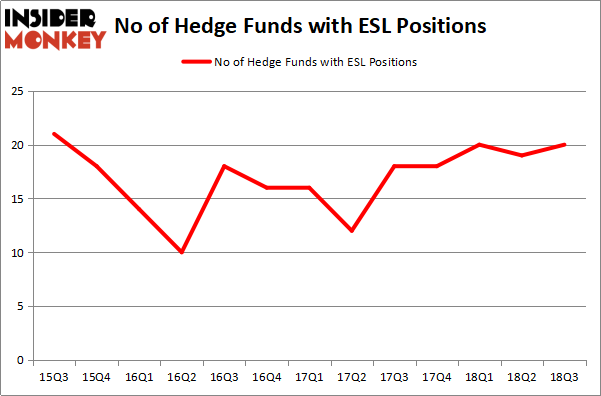 The second most bullish fund manager is Marcato Capital Management, managed by Richard McGuire, which held a $84.1 million position at the end of September; the fund has 9.1% of its 13F portfolio invested in the stock. Other members of the smart money with similar optimism comprise Cliff Asness’s AQR Capital Management, and Ken Fisher’s Fisher Asset Management.

As you can see these stocks had an average of 14.5 hedge funds with bullish positions and the average amount invested in these stocks was $198 million. That figure was $524 million in ESL’s case. QEP Resources Inc (NYSE:QEP) is the most popular stock in this table. On the other hand Mercury Systems Inc (NASDAQ:MRCY) is the least popular one with only 11 bullish hedge fund positions. Esterline Technologies Corporation (NYSE:ESL) is not the most popular stock in this group but hedge fund interest is still above average.

Overall, though, hedge funds owned nearly 20% of ESL’s outstanding shares. They were 400% overweight this stock compared to the other stocks in their portfolios and this proved extremely profitable. Insider Monkey’s quarterly newsletter shares the list of stocks hedge funds are extremely overweight at the end of September.