In this article you are going to find out whether hedge funds think Ultralife Corp. (NASDAQ:ULBI) is a good investment right now. We like to check what the smart money thinks first before doing extensive research on a given stock. Although there have been several high profile failed hedge fund picks, the consensus picks among hedge fund investors have historically outperformed the market after adjusting for known risk attributes. It’s not surprising given that hedge funds have access to better information and more resources to predict the winners in the stock market.

Ultralife Corp. (NASDAQ:ULBI) shares haven’t seen a lot of action during the first quarter. Overall, hedge fund sentiment was unchanged. The stock was in 3 hedge funds’ portfolios at the end of March. The level and the change in hedge fund popularity aren’t the only variables you need to analyze to decipher hedge funds’ perspectives. A stock may witness a boost in popularity but it may still be less popular than similarly priced stocks. That’s why at the end of this article we will examine companies such as Severn Bancorp Inc (NASDAQ:SVBI), Five Prime Therapeutics Inc (NASDAQ:FPRX), and Escalade, Inc. (NASDAQ:ESCA) to gather more data points. Our calculations also showed that ULBI isn’t among the 30 most popular stocks among hedge funds (click for Q1 rankings and see the video for a quick look at the top 5 stocks).

At Insider Monkey we leave no stone unturned when looking for the next great investment idea. For example, legendary investor Bill Miller told investors to sell 7 extremely popular recession stocks last month. So, we went through his list and recommended another stock with 100% upside potential instead. We interview hedge fund managers and ask them about their best ideas. You can watch our latest hedge fund manager interview here and find out the name of the large-cap healthcare stock that Sio Capital’s Michael Castor expects to double. We read hedge fund investor letters and listen to stock pitches at hedge fund conferences. Our best call in 2020 was shorting the market when S&P 500 was trading at 3150 after realizing the coronavirus pandemic’s significance before most investors. Now let’s view the latest hedge fund action surrounding Ultralife Corp. (NASDAQ:ULBI).

What have hedge funds been doing with Ultralife Corp. (NASDAQ:ULBI)?

At the end of the first quarter, a total of 3 of the hedge funds tracked by Insider Monkey held long positions in this stock, a change of 0% from the previous quarter. By comparison, 7 hedge funds held shares or bullish call options in ULBI a year ago. With hedgies’ positions undergoing their usual ebb and flow, there exists a few noteworthy hedge fund managers who were adding to their stakes substantially (or already accumulated large positions). 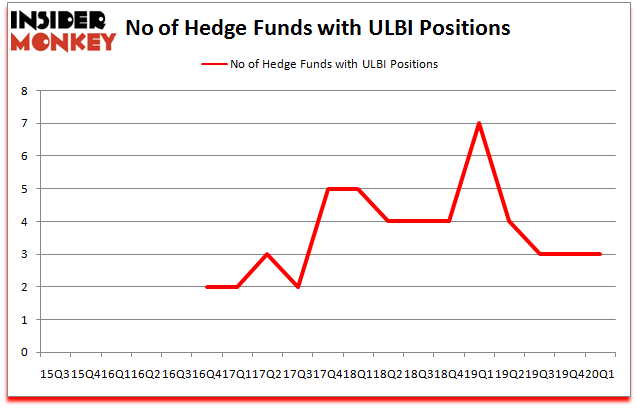 The largest stake in Ultralife Corp. (NASDAQ:ULBI) was held by Renaissance Technologies, which reported holding $1.2 million worth of stock at the end of September. It was followed by Ancora Advisors with a $0.3 million position. The only other hedge fund that is bullish on the company was Millennium Management.

As you can see these stocks had an average of 6.5 hedge funds with bullish positions and the average amount invested in these stocks was $13 million. That figure was $2 million in ULBI’s case. Five Prime Therapeutics Inc (NASDAQ:FPRX) is the most popular stock in this table. On the other hand Escalade, Inc. (NASDAQ:ESCA) is the least popular one with only 3 bullish hedge fund positions. Compared to these stocks Ultralife Corp. (NASDAQ:ULBI) is even less popular than ESCA. Hedge funds clearly dropped the ball on ULBI as the stock delivered strong returns, though hedge funds’ consensus picks still generated respectable returns. Our calculations showed that top 10 most popular stocks among hedge funds returned 41.4% in 2019 and outperformed the S&P 500 ETF (SPY) by 10.1 percentage points. These stocks gained 7.9% in 2020 through May 22nd and still beat the market by 15.6 percentage points. A small number of hedge funds were also right about betting on ULBI as the stock returned 63.1% so far in the second quarter and outperformed the market by an even larger margin.

Woori Financial Group Inc. (WF): Hedge Funds Are In Wait-and-See Mode
Monthly Newsletter Strategy
Download a free copy of our newsletter and see the details inside!
Hedge Fund Resource Center
Related News
Is Ultralife Corp. (ULBI) A Good Stock To Buy? Executive at Media and Entertainment Company Sells Stock after Share Price Surges, Plus Other Interesting Insider Transactions 10 States That Give the Most Money to the Federal Government 13 Largest Cobalt Producing Countries in the World 8 States That Allow Euthanasia
Billionaire Hedge Funds