Out of thousands of stocks that are currently traded on the market, it is difficult to identify those that will really generate strong returns. Hedge funds and institutional investors spend millions of dollars on analysts with MBAs and PhDs, who are industry experts and well connected to other industry and media insiders on top of that. Individual investors can piggyback the hedge funds employing these talents and can benefit from their vast resources and knowledge in that way. We analyze quarterly 13F filings of nearly 750 hedge funds and, by looking at the smart money sentiment that surrounds a stock, we can determine whether it has the potential to beat the market over the long-term. Therefore, let’s take a closer look at what smart money thinks about Biogen Inc. (NASDAQ:BIIB).

Is Biogen Inc. (NASDAQ:BIIB) a healthy stock for your portfolio? The smart money is becoming more confident. The number of bullish hedge fund bets went up by 5 in recent months. Our calculations also showed that BIIB isn’t among the 30 most popular stocks among hedge funds.

Unlike the largest US hedge funds that are convinced Dow will soar past 40,000 or the world’s most bearish hedge fund that’s more convinced than ever that a crash is coming, our long-short investment strategy doesn’t rely on bull or bear markets to deliver double digit returns. We only rely on the best performing hedge funds‘ buy/sell signals. We’re going to take a glance at the fresh hedge fund action regarding Biogen Inc. (NASDAQ:BIIB).

At the end of the third quarter, a total of 48 of the hedge funds tracked by Insider Monkey were bullish on this stock, a change of 12% from the second quarter of 2019. On the other hand, there were a total of 56 hedge funds with a bullish position in BIIB a year ago. With hedgies’ positions undergoing their usual ebb and flow, there exists a few key hedge fund managers who were increasing their stakes significantly (or already accumulated large positions). 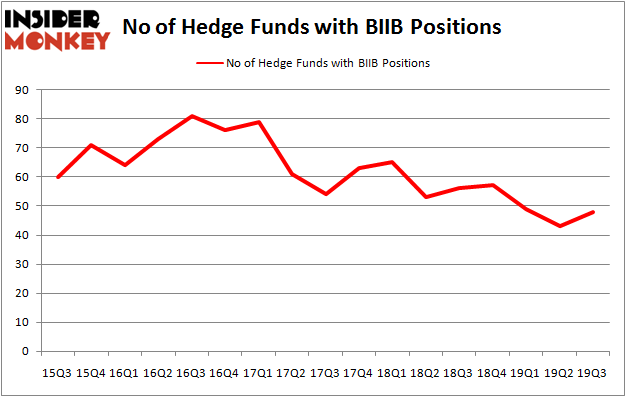 When looking at the institutional investors followed by Insider Monkey, Renaissance Technologies has the most valuable position in Biogen Inc. (NASDAQ:BIIB), worth close to $982.8 million, comprising 0.8% of its total 13F portfolio. Coming in second is AQR Capital Management, managed by Cliff Asness, which holds a $815.2 million position; the fund has 1% of its 13F portfolio invested in the stock. Some other hedge funds and institutional investors with similar optimism include David E. Shaw’s D E Shaw, Peter Rathjens, Bruce Clarke and John Campbell’s Arrowstreet Capital and Noam Gottesman’s GLG Partners. In terms of the portfolio weights assigned to each position Sarissa Capital Management allocated the biggest weight to Biogen Inc. (NASDAQ:BIIB), around 18.76% of its portfolio. Camber Capital Management is also relatively very bullish on the stock, earmarking 4.29 percent of its 13F equity portfolio to BIIB.

As one would reasonably expect, key hedge funds were breaking ground themselves. Healthcor Management, managed by Arthur B Cohen and Joseph Healey, assembled the most valuable call position in Biogen Inc. (NASDAQ:BIIB). Healthcor Management had $128.1 million invested in the company at the end of the quarter. Arthur B Cohen and Joseph Healey’s Healthcor Management also made a $83.1 million investment in the stock during the quarter. The other funds with new positions in the stock are Stephen DuBois’s Camber Capital Management, Michael Gelband’s ExodusPoint Capital, and Karim Abbadi and Edward McBride’s Centiva Capital.

As you can see these stocks had an average of 31.75 hedge funds with bullish positions and the average amount invested in these stocks was $2194 million. That figure was $4207 million in BIIB’s case. The Bank of New York Mellon Corporation (NYSE:BK) is the most popular stock in this table. On the other hand ABB Ltd (NYSE:ABB) is the least popular one with only 13 bullish hedge fund positions. Biogen Inc. (NASDAQ:BIIB) is not the most popular stock in this group but hedge fund interest is still above average. Our calculations showed that top 20 most popular stocks among hedge funds returned 34.7% in 2019 through November 22nd and outperformed the S&P 500 ETF (SPY) by 8.5 percentage points. Hedge funds were also right about betting on BIIB as the stock returned 28.5% during the fourth quarter (through 11/22) and outperformed the market. Hedge funds were rewarded for their relative bullishness.