Hedge Funds Waiting to See What Marvin Ellison Has in Store for Lowe’s Companies, Inc. (LOW)

After a big selloff of the stock in Q2, hedge fund ownership of Lowe’s was largely flat in Q3. The company’s transition to a new CEO (Marvin Ellison took over in early July) may have prompted cautious funds to sell in Q2, but billionaire hedge fund manager Bill Ackman likes the ideas and initiatives that he’s heard from the home improvement retailer’s new leader thus far.

“On his first earnings call, Mr. Ellison provided detailed examples that highlighted the opportunities for improvement and outlined a list of short and long-term initiatives to enhance the company’s operational performance. Since then, Mr. Ellison has completed the hiring of his executive team and announced the closure of 50 underperforming stores (~2% of total stores). We expect the company to provide additional detail on its long-term strategic plans and financial targets at the upcoming analyst day in December,” Ackman wrote in Pershing Square’s Q3 investor letter.

In the 21st century investor’s toolkit there are a multitude of indicators stock traders employ to appraise their holdings. Some of the best indicators are hedge fund and insider trading signals. Our researchers have shown that, historically, those who follow the top picks of the elite investment managers can beat the broader indices by a significant amount (see the details here). 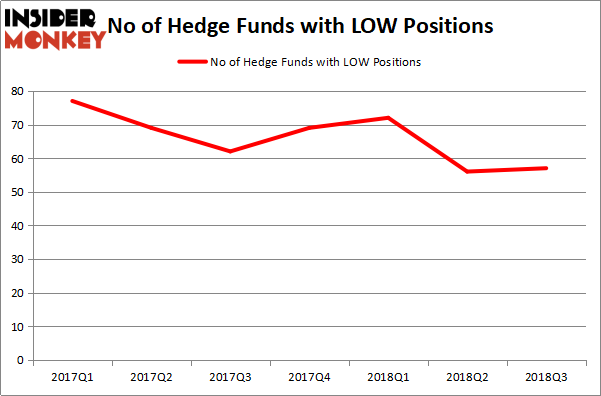 More specifically, D E Shaw was the largest shareholder of Lowe’s Companies, Inc. (NYSE:LOW), with a stake worth $1.01 billion reported as of the end of September. Trailing D E Shaw was Bill Ackman’s Pershing Square, which amassed a stake valued at $968.9 million. Citadel Investment Group, Alkeon Capital Management, and Two Sigma Advisors were also very fond of the stock, giving the stock large weights in their portfolios.

With general bullishness amongst the heavyweights, key hedge funds have been driving this bullishness. Renaissance Technologies, managed by Jim Simons, assembled the most outsized position in Lowe’s Companies, Inc. (NYSE:LOW). Renaissance Technologies had $90.4 million invested in the company at the end of the quarter. Steve Cohen’s Point72 Asset Management also initiated a $53.2 million position during the quarter. The other funds with brand new LOW positions are Clint Carlson’s Carlson Capital, Ian Simm’s Impax Asset Management, and Sander Gerber’s Hudson Bay Capital Management.

As you can see these stocks had an average of 47 hedge funds with bullish positions and the average amount invested in these stocks was $6.50 billion. That figure was $4.73 billion in LOW’s case. Caterpillar Inc. (NYSE:CAT) is the most popular stock in this table. On the other hand Rio Tinto plc (ADR) (NYSE:RIO) is the least popular one with only 20 bullish hedge fund positions. Lowe’s Companies, Inc. (NYSE:LOW) is not the most popular stock in this group but hedge fund interest is still above average. This is a slightly positive signal but we’d rather spend our time researching stocks that hedge funds are piling on right now, like CAT.