The Insider Monkey team has completed processing the quarterly 13F filings for the September quarter submitted by the hedge funds and other money managers included in our extensive database. Most hedge funds have been producing disappointing net returns in recent years, however that was partly due to the poor performance of small-cap stocks in general. Well, small-cap stocks finally turned the corner and have been beating the large-cap stocks by more than 10 percentage points over the last 5 months.This means the relevancy of hedge funds’ public filings became inarguable, as they may reveal numerous high-potential stocks. The following article will discuss the smart money sentiment towards Waddell & Reed Financial, Inc. (NYSE:WDR).

Waddell & Reed Financial, Inc. (NYSE:WDR) has experienced an increase in hedge fund interest recently. WDR was in 15 hedge funds’ portfolios at the end of September. There were 13 hedge funds in our database with WDR holdings at the end of the previous quarter. At the end of this article we will also compare WDR to other stocks including MRC Global Inc (NYSE:MRC), Simmons First National Corporation (NASDAQ:SFNC), and Spark Therapeutics Inc (NASDAQ:ONCE) to get a better sense of its popularity.

What does the smart money think about Waddell & Reed Financial, Inc. (NYSE:WDR)?

At Q3’s end, a total of 15 of the hedge funds tracked by Insider Monkey were long this stock, a 15% gain from the previous quarter. On the other hand, there were a total of 18 hedge funds with a bullish position in WDR at the beginning of this year, so hedge fund ownership of the stock is still down in 2016. With the smart money’s positions undergoing their usual ebb and flow, there exists an “upper tier” of noteworthy hedge fund managers who were increasing their stakes meaningfully (or already accumulated large positions). 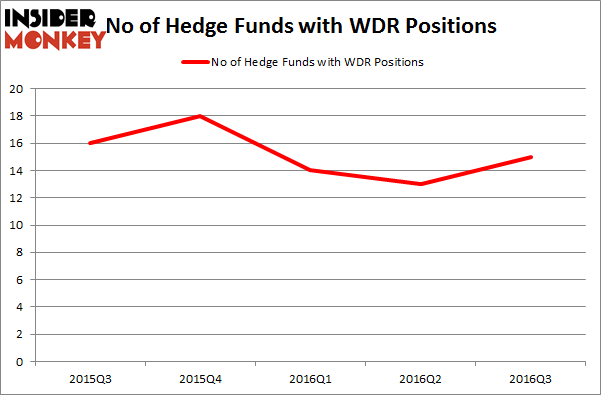 According to publicly available hedge fund and institutional investor holdings data compiled by Insider Monkey, Cliff Asness’ AQR Capital Management has the most valuable position in Waddell & Reed Financial, Inc. (NYSE:WDR), worth close to $40.9 million. The second most bullish fund manager is Fisher Asset Management, led by Ken Fisher, which holds a $35.2 million position. Remaining members of the smart money that are bullish consist of Mario Gabelli’s GAMCO Investors, Israel Englander’s Millennium Management, and Ken Griffin’s Citadel Investment Group. We should note that none of these hedge funds are among our list of the 100 best performing hedge funds which is based on the performance of their 13F long positions in non-microcap stocks.

Best Performing Hedge Funds Strategy
Download a free copy of our newsletter and see the details inside!
Hedge Fund Resource Center
Related News
Billionaire Mario Gabelli Lays Out 5 Finance Stocks That Should Get a Trump Boost What Has Investors Spooked About These 5 Stocks Today? Why These 5 Stocks Are Pulling the Market Down on Tuesday Is Waddell & Reed Financial, Inc. (WDR) A Good Stock To Buy? SVB Financial Group (SIVB), Waddell & Reed Financial Inc. (WDR), Domino’s Pizza Inc. (DPZ): Ken Fisher’s Top Small-Cap Picks Fortress Investment Group LLC (FIG): Insiders Aren’t Crazy About It But Hedge Funds Love It Waddell & Reed Financial, Inc. (WDR): Hedge Funds Are Bullish and Insiders Are Undecided, What Should You Do? 5 Countries That Have the Most Drones 6 Best Smartphones with Optical Zoom 10 Highest Rated Backpacking Tents
Billionaire Hedge Funds