Before we spend countless hours researching a company, we like to analyze what insiders, hedge funds and billionaire investors think of the stock first. This is a necessary first step in our investment process because our research has shown that the elite investors’ consensus returns have been exceptional. In the following paragraphs, we find out what the billionaire investors and hedge funds think of Goldman Sachs Group, Inc. (NYSE:GS). We already reported that hedge funds snapped up Morgan Stanley during the coronavirus crash.

Goldman Sachs Group, Inc. (NYSE:GS) was in 74 hedge funds’ portfolios at the end of the first quarter of 2020. GS investors should pay attention to a decrease in enthusiasm from smart money in recent months. There were 75 hedge funds in our database with GS positions at the end of the previous quarter. Our calculations also showed that GS isn’t among the 30 most popular stocks among hedge funds (click for Q1 rankings and see the video for a quick look at the top 5 stocks).

At Insider Monkey we leave no stone unturned when looking for the next great investment idea.  For example Europe is set to become the world’s largest cannabis market, so we check out this European marijuana stock pitch. We believe electric vehicles and energy storage are set to become giant markets, and we want to take advantage of the declining lithium prices amid the COVID-19 pandemic. So we asked astrophysicist Neil deGrasse Tyson about Tesla, Elon Musk, and his top stock picks. We read hedge fund investor letters and listen to stock pitches at hedge fund conferences. Our best call in 2020 was shorting the market when S&P 500 was trading at 3150 after realizing the coronavirus pandemic’s significance before most investors. Now let’s check out the latest hedge fund action encompassing Goldman Sachs Group, Inc. (NYSE:GS).

At Q1’s end, a total of 74 of the hedge funds tracked by Insider Monkey were long this stock, a change of -1% from one quarter earlier. The graph below displays the number of hedge funds with bullish position in GS over the last 18 quarters. With hedge funds’ positions undergoing their usual ebb and flow, there exists a select group of key hedge fund managers who were adding to their holdings considerably (or already accumulated large positions). 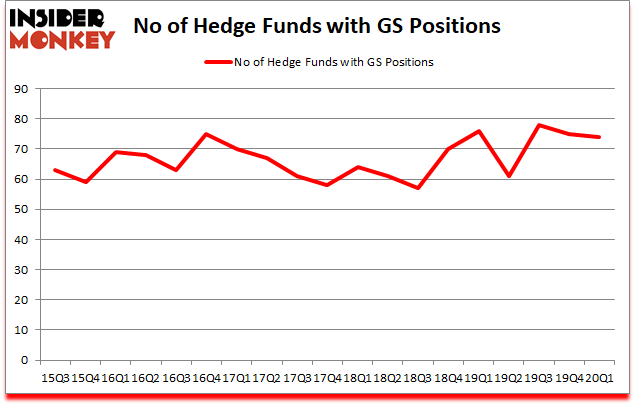 The largest stake in Goldman Sachs Group, Inc. (NYSE:GS) was held by Eagle Capital Management, which reported holding $1051.2 million worth of stock at the end of September. It was followed by Greenhaven Associates with a $449.5 million position. Other investors bullish on the company included Berkshire Hathaway, Citadel Investment Group, and Pzena Investment Management. In terms of the portfolio weights assigned to each position Tegean Capital Management allocated the biggest weight to Goldman Sachs Group, Inc. (NYSE:GS), around 23.82% of its 13F portfolio. Greenhaven Associates is also relatively very bullish on the stock, dishing out 16.73 percent of its 13F equity portfolio to GS.

Due to the fact that Goldman Sachs Group, Inc. (NYSE:GS) has witnessed a decline in interest from the aggregate hedge fund industry, we can see that there lies a certain “tier” of fund managers who sold off their positions entirely by the end of the third quarter. Interestingly, Charles de Vaulx’s International Value Advisers dumped the biggest investment of all the hedgies monitored by Insider Monkey, totaling an estimated $117.9 million in stock. Doug Silverman and Alexander Klabin’s fund, Senator Investment Group, also dropped its stock, about $115 million worth. These transactions are intriguing to say the least, as aggregate hedge fund interest fell by 1 funds by the end of the third quarter.

As you can see these stocks had an average of 48.25 hedge funds with bullish positions and the average amount invested in these stocks was $2537 million. That figure was $3085 million in GS’s case. Morgan Stanley (NYSE:MS) is the most popular stock in this table. On the other hand VMware, Inc. (NYSE:VMW) is the least popular one with only 27 bullish hedge fund positions. Compared to these stocks Goldman Sachs Group, Inc. (NYSE:GS) is more popular among hedge funds. Our calculations showed that top 10 most popular stocks among hedge funds returned 41.4% in 2019 and outperformed the S&P 500 ETF (SPY) by 10.1 percentage points. These stocks gained 7.9% in 2020 through May 22nd but still managed to beat the market by 15.6 percentage points. Hedge funds were also right about betting on GS, though not to the same extent, as the stock returned 16.4% in Q2 (through May 22nd) and outperformed the market as well.