Insider Monkey has processed numerous 13F filings of hedge funds and successful value investors to create an extensive database of hedge fund holdings. The 13F filings show the hedge funds’ and successful investors’ positions as of the end of the first quarter. You can find articles about an individual hedge fund’s trades on numerous financial news websites. However, in this article we will take a look at their collective moves over the last 4.5 years and analyze what the smart money thinks of BlackRock, Inc. (NYSE:BLK) based on that data.

BlackRock, Inc. (NYSE:BLK) was in 38 hedge funds’ portfolios at the end of the first quarter of 2020. BLK investors should be aware of a decrease in enthusiasm from smart money recently. There were 43 hedge funds in our database with BLK holdings at the end of the previous quarter. Our calculations also showed that BLK isn’t among the 30 most popular stocks among hedge funds (click for Q1 rankings and see the video for a quick look at the top 5 stocks).

At Insider Monkey we leave no stone unturned when looking for the next great investment idea. For example, 2020’s unprecedented market conditions provide us with the highest number of trading opportunities in a decade. So we are checking out trades like this one. We interview hedge fund managers and ask them about their best ideas. If you want to find out the best healthcare stock to buy right now, you can watch our latest hedge fund manager interview here. We read hedge fund investor letters and listen to stock pitches at hedge fund conferences. Our best call in 2020 was shorting the market when the S&P 500 was trading at 3150 after realizing the coronavirus pandemic’s significance before most investors. With all of this in mind let’s take a look at the key hedge fund action encompassing BlackRock, Inc. (NYSE:BLK).

At Q1’s end, a total of 38 of the hedge funds tracked by Insider Monkey were long this stock, a change of -12% from the fourth quarter of 2019. On the other hand, there were a total of 45 hedge funds with a bullish position in BLK a year ago. With hedgies’ positions undergoing their usual ebb and flow, there exists a select group of key hedge fund managers who were adding to their holdings significantly (or already accumulated large positions). 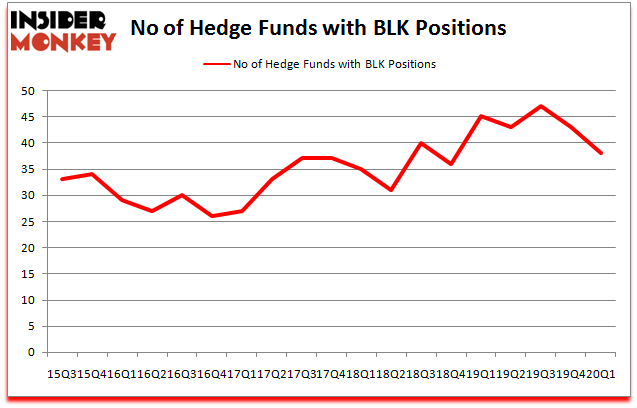 According to Insider Monkey’s hedge fund database, Tom Gayner’s Markel Gayner Asset Management has the biggest position in BlackRock, Inc. (NYSE:BLK), worth close to $96.9 million, amounting to 1.8% of its total 13F portfolio. The second most bullish fund manager is Citadel Investment Group, managed by Ken Griffin, which holds a $88.4 million position; less than 0.1%% of its 13F portfolio is allocated to the stock. Some other peers that hold long positions include Robert Pohly’s Samlyn Capital, Phill Gross and Robert Atchinson’s Adage Capital Management and Cliff Asness’s AQR Capital Management. In terms of the portfolio weights assigned to each position Shanda Asset Management allocated the biggest weight to BlackRock, Inc. (NYSE:BLK), around 5.08% of its 13F portfolio. Sustainable Insight Capital Management is also relatively very bullish on the stock, designating 2.81 percent of its 13F equity portfolio to BLK.

Judging by the fact that BlackRock, Inc. (NYSE:BLK) has faced declining sentiment from the entirety of the hedge funds we track, we can see that there lies a certain “tier” of funds that elected to cut their entire stakes in the third quarter. Interestingly, Ray Dalio’s Bridgewater Associates sold off the largest investment of all the hedgies tracked by Insider Monkey, worth close to $16.1 million in stock, and Usman Waheed’s Strycker View Capital was right behind this move, as the fund cut about $11.5 million worth. These moves are important to note, as total hedge fund interest was cut by 5 funds in the third quarter.

As you can see these stocks had an average of 39.75 hedge funds with bullish positions and the average amount invested in these stocks was $1806 million. That figure was $678 million in BLK’s case. Cigna Corporation (NYSE:CI) is the most popular stock in this table. On the other hand Coca-Cola FEMSA, S.A.B. de C.V. (NYSE:KOF) is the least popular one with only 7 bullish hedge fund positions. BlackRock, Inc. (NYSE:BLK) is not the least popular stock in this group but hedge fund interest is still below average. Our calculations showed that top 10 most popular stocks among hedge funds returned 41.4% in 2019 and outperformed the S&P 500 ETF (SPY) by 10.1 percentage points. These stocks gained 8.3% in 2020 through the end of May but beat the market by 13.2 percentage points. A small number of hedge funds were also right about betting on BLK, though not to the same extent, as the stock returned 20.2% during the second quarter and outperformed the market.