We at Insider Monkey have gone over 821 13F filings that hedge funds and prominent investors are required to file by the SEC The 13F filings show the funds’ and investors’ portfolio positions as of March 31st, near the height of the coronavirus market crash. In this article, we look at what those funds think of American Tower Corporation (NYSE:AMT) based on that data.

American Tower Corporation (NYSE:AMT) has experienced an increase in hedge fund sentiment of late. AMT was in 57 hedge funds’ portfolios at the end of the first quarter of 2020. There were 46 hedge funds in our database with AMT holdings at the end of the previous quarter. Our calculations also showed that AMT isn’t among the 30 most popular stocks among hedge funds (click for Q1 rankings and see the video for a quick look at the top 5 stocks).

At Insider Monkey we leave no stone unturned when looking for the next great investment idea. For example, legendary investor Bill Miller told investors to sell 7 extremely popular recession stocks last month. So, we went through his list and recommended another stock with 100% upside potential instead. We interview hedge fund managers and ask them about their best ideas. You can watch our latest hedge fund manager interview here and find out the name of the large-cap healthcare stock that Sio Capital’s Michael Castor expects to double. We read hedge fund investor letters and listen to stock pitches at hedge fund conferences. Our best call in 2020 was shorting the market when S&P 500 was trading at 3150 after realizing the coronavirus pandemic’s significance before most investors. Keeping this in mind let’s take a look at the key hedge fund action encompassing American Tower Corporation (NYSE:AMT).

Heading into the second quarter of 2020, a total of 57 of the hedge funds tracked by Insider Monkey were bullish on this stock, a change of 24% from one quarter earlier. By comparison, 39 hedge funds held shares or bullish call options in AMT a year ago. With the smart money’s capital changing hands, there exists a select group of noteworthy hedge fund managers who were increasing their holdings considerably (or already accumulated large positions). 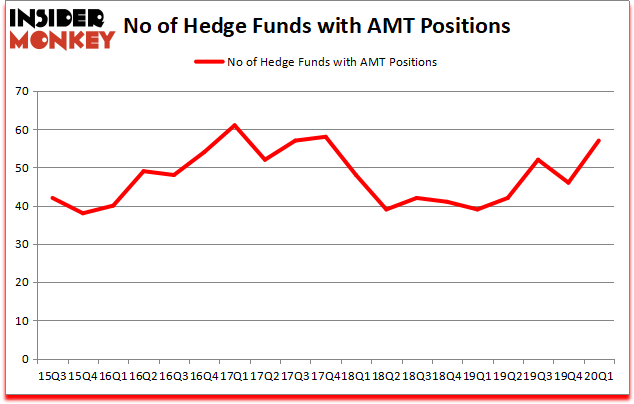 As industrywide interest jumped, some big names have been driving this bullishness. Point72 Asset Management, managed by Steve Cohen, established the largest position in American Tower Corporation (NYSE:AMT). Point72 Asset Management had $20.1 million invested in the company at the end of the quarter. Stephen J. Errico’s Locust Wood Capital Advisers also made a $13.3 million investment in the stock during the quarter. The other funds with new positions in the stock are Josh Donfeld and David Rogers’s Castle Hook Partners, Donald Sussman’s Paloma Partners, and Joseph Samuels’s Islet Management.

As you can see these stocks had an average of 36 hedge funds with bullish positions and the average amount invested in these stocks was $1504 million. That figure was $3820 million in AMT’s case. Lockheed Martin Corporation (NYSE:LMT) is the most popular stock in this table. On the other hand TOTAL S.A. (NYSE:TOT) is the least popular one with only 12 bullish hedge fund positions. Compared to these stocks American Tower Corporation (NYSE:AMT) is more popular among hedge funds. Our calculations showed that top 10 most popular stocks among hedge funds returned 41.4% in 2019 and outperformed the S&P 500 ETF (SPY) by 10.1 percentage points. These stocks gained 7.9% in 2020 through May 22nd and still beat the market by 15.6 percentage points. Unfortunately AMT wasn’t nearly as popular as these 10 stocks and hedge funds that were betting on AMT were disappointed as the stock returned 11.8% during the second quarter (through May 22nd) and underperformed the market. If you are interested in investing in large cap stocks with huge upside potential, you should check out the top 10 most popular stocks among hedge funds as most of these stocks already outperformed the market in 2020.