Analysts at SunTrust Robinson Humphrey recently initiated coverage on two leading restaurant chains, setting a ‘Buy’ rating and $117 price target on McDonald’s Corporation (NYSE:MCD) alongside a ‘Buy’ rating and $850 price target on Chipotle Mexican Grill, Inc. (NYSE:CMG). Shares of McDonalds are up by 1.23% while shares of Chipotle have rallied by 0.68% in early morning trading. In this article, we will take a closer look at the upgraded stocks and see if the smart money sees the same potential in them as the analysts do. 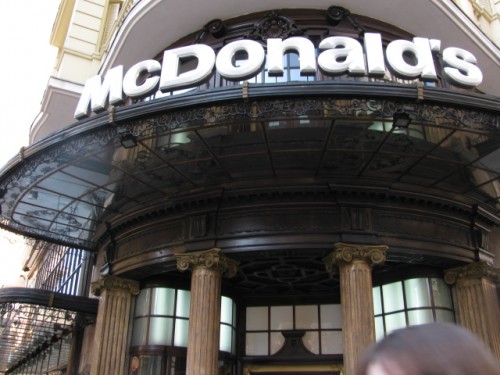 We mention the hedge fund activity concerning the two stocks because our research has shown that historically their stock picks delivered superior risk-adjusted returns. This is especially true in the small-cap space. The 50 most popular large-cap stocks among hedge funds had a monthly alpha of about six basis points per month between 1999 and 2012; however the 15 most popular small-cap stocks delivered a monthly alpha of 80 basis points during the same period. This means investors would have generated a double-digit alpha per year simply by imitating hedge funds’ top 15 small-cap ideas. We have been tracking the performance of these stocks since the end of August 2012 in real time and these stocks beat the market by 60 percentage points (118% return vs. the S&P 500’s 57.6% gain) over the last 36 months (see the details here).

McDonald’s Corporation (NYSE:MCD)‘s same-store sales have been atrocious in recent quarters, as a strong dollar and flagging demand weigh on the company’s operations. To address the issue, management announced that it will take the asset-light approach and franchise more stores, while also increasing the use of mobile technology. By giving individuals ownership of McDonald’s stores and taking a royalty instead, McDonald’s hopes to increase same-store sales because individual owners will have more incentive to optimize the stores. McDonald’s will be less insulated from the bad parts of the business cycle. Management also hopes mobile apps will increase demand for McDonald’s food.

Some analysts think McDonald’s is beginning to see the fruits of management’s new strategy. Analysts at Credit Suisse upgraded McDonald’s Corporation on September 29, citing stronger same-store sales trends. Like Credit Suisse, the analysts at SunTrust Robinson Humphrey rated McDonald’s a ‘Buy’ because they think same-store sales will improve as well. They note McDonald’s CEO Steve Easterbrook has a solid track record of successful turnarounds and that McDonald’s valuation is attractive given its 3.34% dividend yield and forward P/E of 19.76.

Our data shows that hedge funds are also bullish on McDonald’s Corporation (NYSE:MCD). Out of the 730 elite funds we track, 81 of them owned $6.28 billion worth of the company’s stock (representing 6.90% of the float) on June 30, versus 89 funds and $6.83 billion respectively at the end of March. Southeastern Asset Management owns 9.87 million shares, while Jonathon Jacobson’s Highfields Capital Management owns 9.81 million shares.