Hedge Funds Never Been This Bullish On The Charles Schwab (SCHW)

The latest 13F reporting period has come and gone, and Insider Monkey have plowed through 823 13F filings that hedge funds and well-known value investors are required to file by the SEC. The 13F filings show the funds’ and investors’ portfolio positions as of June 30th, when the S&P 500 Index was trading around the 3100 level. Since the end of March, investors decided to bet on the economic recovery and a stock market rebound. S&P 500 Index returned more than 50% since its bottom. In this article you are going to find out whether hedge funds thought The Charles Schwab Corporation (NYSE:SCHW) was a good investment heading into the third quarter and how the stock traded in comparison to the top hedge fund picks.

Is The Charles Schwab Corporation (NYSE:SCHW) the right pick for your portfolio? Investors who are in the know were taking an optimistic view. The number of long hedge fund bets inched up by 9 lately. The Charles Schwab Corporation (NYSE:SCHW) was in 71 hedge funds’ portfolios at the end of the second quarter of 2020. The all time high for this statistics is 70. This means the bullish number of hedge fund positions in this stock currently sits at its all time high. Our calculations also showed that SCHW isn’t among the 30 most popular stocks among hedge funds (click for Q2 rankings and see the video for a quick look at the top 5 stocks).

If you’d ask most traders, hedge funds are seen as worthless, outdated financial vehicles of the past. While there are over 8000 funds with their doors open today, Our experts choose to focus on the crème de la crème of this club, around 850 funds. These investment experts shepherd most of the hedge fund industry’s total asset base, and by keeping track of their highest performing investments, Insider Monkey has discovered many investment strategies that have historically surpassed the market. Insider Monkey’s flagship short hedge fund strategy outstripped the S&P 500 short ETFs by around 20 percentage points annually since its inception in March 2017. Our portfolio of short stocks lost 34% since February 2017 (through August 17th) even though the market was up 53% during the same period. We just shared a list of 8 short targets in our latest quarterly update .

At Insider Monkey we scour multiple sources to uncover the next great investment idea. Currently, investors are pessimistic about commercial real estate investments. So, we are checking out this contrarian play to diversify our market exposure. We go through lists like the 10 most profitable companies in America to pick the best large-cap stocks to buy. Even though we recommend positions in only a tiny fraction of the companies we analyze, we check out as many stocks as we can. We read hedge fund investor letters and listen to stock pitches at hedge fund conferences. If you want to find out the best healthcare stock to buy right now, you can watch our latest hedge fund manager interview here. Now let’s take a look at the recent hedge fund action surrounding The Charles Schwab Corporation (NYSE:SCHW).

What have hedge funds been doing with The Charles Schwab Corporation (NYSE:SCHW)?

At the end of June, a total of 71 of the hedge funds tracked by Insider Monkey held long positions in this stock, a change of 15% from one quarter earlier. Below, you can check out the change in hedge fund sentiment towards SCHW over the last 20 quarters. With hedgies’ sentiment swirling, there exists a select group of notable hedge fund managers who were boosting their holdings significantly (or already accumulated large positions). 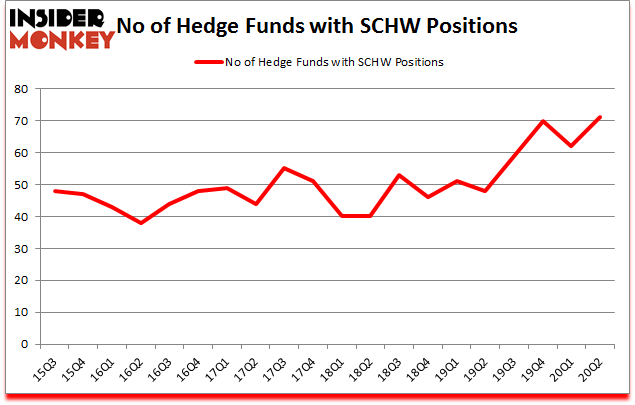 When looking at the institutional investors followed by Insider Monkey, David Blood and Al Gore’s Generation Investment Management has the biggest position in The Charles Schwab Corporation (NYSE:SCHW), worth close to $895.4 million, corresponding to 5.2% of its total 13F portfolio. On Generation Investment Management’s heels is William Duhamel of Route One Investment Company, with a $491.4 million position; 14% of its 13F portfolio is allocated to the stock. Other professional money managers that hold long positions encompass Ric Dillon’s Diamond Hill Capital, Ken Griffin’s Citadel Investment Group and Ricky Sandler’s Eminence Capital. In terms of the portfolio weights assigned to each position Route One Investment Company allocated the biggest weight to The Charles Schwab Corporation (NYSE:SCHW), around 14.01% of its 13F portfolio. Yost Capital Management is also relatively very bullish on the stock, designating 12.53 percent of its 13F equity portfolio to SCHW.

Now, key money managers have been driving this bullishness. Greenhaven Associates, managed by Edgar Wachenheim, created the most outsized position in The Charles Schwab Corporation (NYSE:SCHW). Greenhaven Associates had $123.6 million invested in the company at the end of the quarter. Dmitry Balyasny’s Balyasny Asset Management also initiated a $86.3 million position during the quarter. The following funds were also among the new SCHW investors: Phill Gross and Robert Atchinson’s Adage Capital Management, Thyra Zerhusen’s Fairpointe Capital, and Parvinder Thiara’s Athanor Capital.

As you can see these stocks had an average of 17.1 hedge funds with bullish positions and the average amount invested in these stocks was $1273 million. That figure was $3296 million in SCHW’s case. General Dynamics Corporation (NYSE:GD) is the most popular stock in this table. On the other hand National Grid plc (NYSE:NGG) is the least popular one with only 2 bullish hedge fund positions. Compared to these stocks The Charles Schwab Corporation (NYSE:SCHW) is more popular among hedge funds. Our overall hedge fund sentiment score for SCHW is 90. Stocks with higher number of hedge fund positions relative to other stocks as well as relative to their historical range receive a higher sentiment score. Our calculations showed that top 10 most popular stocks among hedge funds returned 41.4% in 2019 and outperformed the S&P 500 ETF (SPY) by 10.1 percentage points. These stocks gained 28.2% in 2020 through August 24th and still beat the market by 20.6 percentage points. Unfortunately SCHW wasn’t nearly as popular as these 10 stocks and hedge funds that were betting on SCHW were disappointed as the stock returned 4.6% since the end of the second quarter and underperformed the market. If you are interested in investing in large cap stocks with huge upside potential, you should check out the top 10 most popular stocks among hedge funds as most of these stocks already outperformed the market in 2020.

The Return of Enterprise Blockchain – Concordium Aims to Succeed Where...