Most investors tend to think that hedge funds and other asset managers are worthless, as they cannot beat even simple index fund portfolios. In fact, most people expect hedge funds to compete with and outperform the bull market that we have witnessed in recent years. However, hedge funds are generally partially hedged and aim at delivering attractive risk-adjusted returns rather than following the ups and downs of equity markets hoping that they will outperform the broader market. Our research shows that certain hedge funds do have great stock picking skills (and we can identify these hedge funds in advance pretty accurately), so let’s take a glance at the smart money sentiment towards Applied Materials, Inc. (NASDAQ:AMAT).

Applied Materials, Inc. (NASDAQ:AMAT) was in 78 hedge funds’ portfolios at the end of March. The all time high for this statistic was previously 72. This means the bullish number of hedge fund positions in this stock currently sits at its all time high. AMAT investors should be aware of an increase in enthusiasm from smart money of late. There were 61 hedge funds in our database with AMAT positions at the end of the fourth quarter. Our calculations also showed that AMAT isn’t among the 30 most popular stocks among hedge funds (click for Q1 rankings).

At Insider Monkey we leave no stone unturned when looking for the next great investment idea. For example, lithium mining is one of the fastest growing industries right now, so we are checking out stock pitches like this emerging lithium stock. We go through lists like the 10 best hydrogen fuel cell stocks to pick the next Tesla that will deliver a 10x return. Even though we recommend positions in only a tiny fraction of the companies we analyze, we check out as many stocks as we can. We read hedge fund investor letters and listen to stock pitches at hedge fund conferences. You can subscribe to our free daily newsletter on our homepage. Now let’s take a look at the latest hedge fund action surrounding Applied Materials, Inc. (NASDAQ:AMAT).

Do Hedge Funds Think AMAT Is A Good Stock To Buy Now?

At first quarter’s end, a total of 78 of the hedge funds tracked by Insider Monkey were bullish on this stock, a change of 28% from the fourth quarter of 2020. Below, you can check out the change in hedge fund sentiment towards AMAT over the last 23 quarters. With hedge funds’ sentiment swirling, there exists an “upper tier” of noteworthy hedge fund managers who were increasing their holdings substantially (or already accumulated large positions). 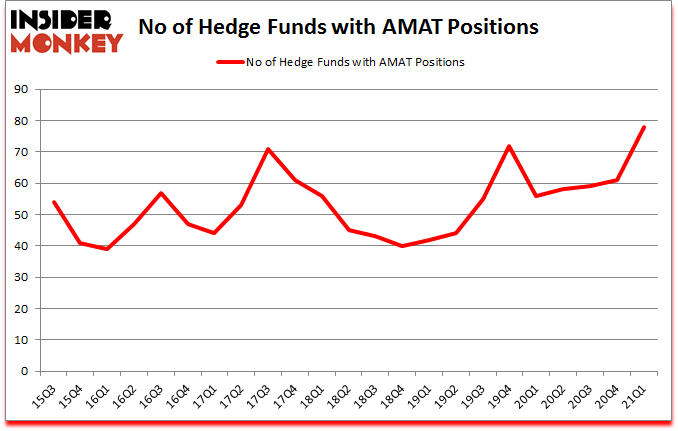 More specifically, Generation Investment Management was the largest shareholder of Applied Materials, Inc. (NASDAQ:AMAT), with a stake worth $590.9 million reported as of the end of March. Trailing Generation Investment Management was Cantillon Capital Management, which amassed a stake valued at $504.5 million. Whale Rock Capital Management, Matrix Capital Management, and Polar Capital were also very fond of the stock, becoming one of the largest hedge fund holders of the company. In terms of the portfolio weights assigned to each position Albar Capital allocated the biggest weight to Applied Materials, Inc. (NASDAQ:AMAT), around 9.73% of its 13F portfolio. Abrams Bison Investments is also relatively very bullish on the stock, designating 9.49 percent of its 13F equity portfolio to AMAT.

As you can see these stocks had an average of 42.3 hedge funds with bullish positions and the average amount invested in these stocks was $2563 million. That figure was $5711 million in AMAT’s case. Sea Limited (NYSE:SE) is the most popular stock in this table. On the other hand HSBC Holdings plc (NYSE:HSBC) is the least popular one with only 12 bullish hedge fund positions. Applied Materials, Inc. (NASDAQ:AMAT) is not the most popular stock in this group but hedge fund interest is still above average. Our overall hedge fund sentiment score for AMAT is 78.4. Stocks with higher number of hedge fund positions relative to other stocks as well as relative to their historical range receive a higher sentiment score. This is a slightly positive signal but we’d rather spend our time researching stocks that hedge funds are piling on. Our calculations showed that top 5 most popular stocks among hedge funds returned 95.8% in 2019 and 2020, and outperformed the S&P 500 ETF (SPY) by 40 percentage points. These stocks gained 17.2% in 2021 through June 11th and beat the market again by 3.3 percentage points. Unfortunately AMAT wasn’t nearly as popular as these 5 stocks and hedge funds that were betting on AMAT were disappointed as the stock returned 2.6% since the end of March (through 6/11) and underperformed the market. If you are interested in investing in large cap stocks with huge upside potential, you should check out the top 5 most popular stocks among hedge funds as many of these stocks already outperformed the market since 2019.