Hedge funds are not perfect. They have their bad picks just like everyone else. Facebook, a stock hedge funds have loved, lost a third of its value since the end of July. Although hedge funds are not perfect, their consensus picks do deliver solid returns, however. Our data show the top 30 S&P 500 stocks among hedge funds at the end of September 2018 yielded an average return of 6.7% year-to-date, vs. a gain of 2.6% for the S&P 500 Index. Because hedge funds have a lot of resources and their consensus picks do well, we pay attention to what they think. In this article, we analyze what the elite funds think of Hilton Worldwide Holdings Inc (NYSE:HLT).

Hedge fund ownership of Hilton fell in Q3 on concerns about the overall state of the lodging industry, but the smart money remains very bullish on the company, owning over 14% of its shares. A former shareholder of Hilton, billionaire Bill Ackman bought back into the stock in Q3 after selling it off last summer, stating that it’s nearly as cheap right now as it’s ever been to own one of the 10 Most Profitable Hotels in The World.

“At the current share price, Hilton is trading at only 20 times our estimate of next year’s free cash flow. This is one of the lowest valuations at which Hilton has traded since the spinoff of its owned hotels and timeshare business at the beginning of 2017, significantly below our estimate of the company’s intrinsic value based upon its high-quality, fee-based business model and strong future growth potential,” Ackman wrote in Pershing Square’s Q3 investor letter.

What does the smart money think about Hilton Worldwide Holdings Inc (NYSE:HLT)?

At the end of the third quarter, a total of 45 of the hedge funds tracked by Insider Monkey were long this stock, a decline of 18% from one quarter earlier. On the other hand, there were a total of just 39 hedge funds with a bullish position in HLT a year earlier. With the smart money’s sentiment swirling, there exists a few noteworthy hedge fund managers who were upping their holdings significantly (or already accumulated large positions). 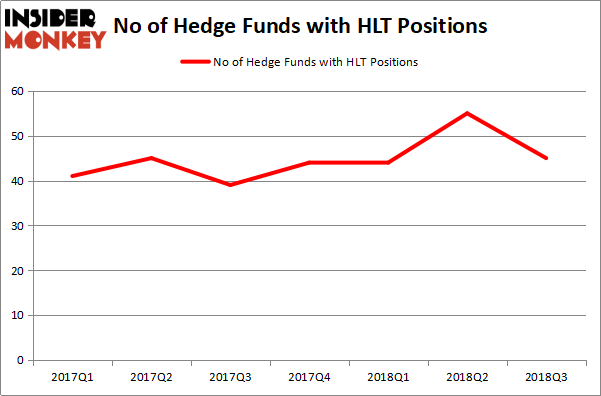 Among these funds, Long Pond Capital held the most valuable stake in Hilton Worldwide Holdings Inc (NYSE:HLT), which was worth $412.8 million at the end of the second quarter. On the second spot was Hound Partners which amassed $362.6 million worth of shares. Moreover, Jonathon Jacobson’s Highfields Capital Management, as well as OZ Management and Suvretta Capital Management were also bullish on Hilton Worldwide Holdings Inc (NYSE:HLT), allocating a large percentage of their portfolios to this stock.

Judging by the fact that Hilton Worldwide Holdings Inc (NYSE:HLT) has witnessed falling interest from the entirety of the hedge funds we track, it’s easy to see that there was a specific group of fund managers who sold off their full holdings in the third quarter. Intriguingly, Alexander Mitchell’s Scopus Asset Management sold off the largest position of the 700 funds followed by Insider Monkey, comprising about $62.9 million in stock, and Brandon Haley’s Holocene Advisors was right behind this move, as the fund dropped about $56.8 million worth. These bearish behaviors are important to note, as aggregate hedge fund interest fell by 10 funds in the third quarter.

As you can see these stocks had an average of 21 hedge funds with bullish positions and the average amount invested in these stocks was $527 million. That figure was $3.39 billion in HLT’s case. Hewlett Packard Enterprise Company (NYSE:HPE) is the most popular stock in this table. On the other hand Sun Life Financial Inc. (USA) (NYSE:SLF) is the least popular one with only 13 bullish hedge fund positions. Compared to these stocks Hilton Worldwide Holdings Inc (NYSE:HLT) is more popular among hedge funds. Considering that hedge funds are very bullish on this stock in relation to its market cap peers, it may be a good idea to analyze it in detail and potentially include it in your portfolio.

10 Most Profitable Hotels In The WorldIs HLT A Good Investment Right Now?Is HLT A Good Stock To Buy?NYSE:HLTYahoo Finance