The latest 13F reporting period has come and gone, and Insider Monkey is again at the forefront when it comes to making use of this gold mine of data. We at Insider Monkey have plowed through 823 13F filings that hedge funds and well-known value investors are required to file by the SEC. The 13F filings show the funds’ and investors’ portfolio positions as of June 30th, when the S&P 500 Index was trading around the 3100 level. Stocks kept going up since then. In this article we look at how hedge funds traded East West Bancorp, Inc. (NASDAQ:EWBC) and determine whether the smart money was really smart about this stock.

East West Bancorp, Inc. (NASDAQ:EWBC) was in 23 hedge funds’ portfolios at the end of the second quarter of 2020. The all time high for this statistics is 30. EWBC investors should be aware of a decrease in enthusiasm from smart money recently. There were 25 hedge funds in our database with EWBC positions at the end of the first quarter. Our calculations also showed that EWBC isn’t among the 30 most popular stocks among hedge funds (click for Q2 rankings and see the video for a quick look at the top 5 stocks).

In the 21st century investor’s toolkit there are numerous signals stock market investors employ to assess stocks. A couple of the most useful signals are hedge fund and insider trading moves. Our researchers have shown that, historically, those who follow the top picks of the top hedge fund managers can trounce the market by a very impressive margin (see the details here).

At Insider Monkey we scour multiple sources to uncover the next great investment idea. For example, Federal Reserve has been creating trillions of dollars electronically to keep the interest rates near zero. We believe this will lead to inflation and boost precious metals prices. So, we are checking out this lithium company which could also benefit from the electric car adoption. We go through lists like the 10 most profitable companies in the world to pick the best large-cap stocks to buy. Even though we recommend positions in only a tiny fraction of the companies we analyze, we check out as many stocks as we can. We read hedge fund investor letters and listen to stock pitches at hedge fund conferences. You can subscribe to our free daily newsletter on our website to get excerpts of these letters in your inbox. With all of this in mind we’re going to check out the fresh hedge fund action surrounding East West Bancorp, Inc. (NASDAQ:EWBC).

How have hedgies been trading East West Bancorp, Inc. (NASDAQ:EWBC)?

Heading into the third quarter of 2020, a total of 23 of the hedge funds tracked by Insider Monkey were bullish on this stock, a change of -8% from one quarter earlier. The graph below displays the number of hedge funds with bullish position in EWBC over the last 20 quarters. So, let’s check out which hedge funds were among the top holders of the stock and which hedge funds were making big moves. 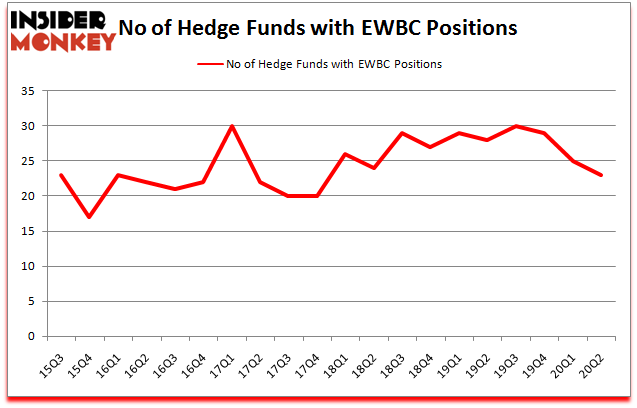 The largest stake in East West Bancorp, Inc. (NASDAQ:EWBC) was held by Adage Capital Management, which reported holding $58.5 million worth of stock at the end of September. It was followed by Fisher Asset Management with a $50 million position. Other investors bullish on the company included Two Sigma Advisors, AQR Capital Management, and Renaissance Technologies. In terms of the portfolio weights assigned to each position Basswood Capital allocated the biggest weight to East West Bancorp, Inc. (NASDAQ:EWBC), around 1.13% of its 13F portfolio. Adage Capital Management is also relatively very bullish on the stock, dishing out 0.15 percent of its 13F equity portfolio to EWBC.

Judging by the fact that East West Bancorp, Inc. (NASDAQ:EWBC) has faced bearish sentiment from hedge fund managers, it’s safe to say that there lies a certain “tier” of money managers that decided to sell off their full holdings in the second quarter. At the top of the heap, Ken Griffin’s Citadel Investment Group said goodbye to the biggest position of the “upper crust” of funds monitored by Insider Monkey, comprising about $7.5 million in stock, and Brandon Haley’s Holocene Advisors was right behind this move, as the fund cut about $1.2 million worth. These transactions are intriguing to say the least, as total hedge fund interest was cut by 2 funds in the second quarter.

As you can see these stocks had an average of 28.7 hedge funds with bullish positions and the average amount invested in these stocks was $601 million. That figure was $224 million in EWBC’s case. Apache Corporation (NASDAQ:APA) is the most popular stock in this table. On the other hand Stericycle Inc (NASDAQ:SRCL) is the least popular one with only 23 bullish hedge fund positions. Compared to these stocks East West Bancorp, Inc. (NASDAQ:EWBC) is even less popular than SRCL. Our overall hedge fund sentiment score for EWBC is 26. Stocks with higher number of hedge fund positions relative to other stocks as well as relative to their historical range receive a higher sentiment score. Hedge funds dodged a bullet by taking a bearish stance towards EWBC. Our calculations showed that the top 10 most popular hedge fund stocks returned 41.4% in 2019 and outperformed the S&P 500 ETF (SPY) by 10.1 percentage points. These stocks gained 24.8% in 2020 through the end of September but managed to beat the market by 19.3 percentage points. Unfortunately EWBC wasn’t nearly as popular as these 10 stocks (hedge fund sentiment was very bearish); EWBC investors were disappointed as the stock returned -8.9% in the third quarter and underperformed the market. If you are interested in investing in large cap stocks with huge upside potential, you should check out the top 10 most popular stocks among hedge funds as most of these stocks already outperformed the market so far in 2020.