Concerns over rising interest rates and expected further rate increases have hit several stocks hard since the end of the third quarter. The NASDAQ and Russell 2000 indices are already in correction territory. More importantly, the Russell 2000 ETF (IWM) underperformed the larger S&P 500 ETF (SPY) by about 4 percentage points in October. Hedge funds and institutional investors tracked by Insider Monkey usually invest a disproportionate amount of their portfolios in smaller cap stocks. We have been receiving indications that hedge funds were paring back their overall exposure and this is one of the factors behind the recent movements in major indices. In this article, we will take a closer look at hedge fund sentiment towards Darden Restaurants, Inc. (NYSE:DRI).

Hedge fund ownership of Darden Restaurants dipped slightly in Q2, but remained bullish overall, as 25 hedge funds were long the stock. A few funds selling out of the stock was not a big surprise given its 28% gains in the second quarter. Louis Bacon’s Moore Global Investments (133,027 shares) and Israel Englander’s Millennium Management (1.29 million shares) were among the many billionaire money managers that owned the stock on June 30, ranking it 25th on our list of the 25 Stocks Billionaires Are Piling On. Darden’s Olive Garden restaurant chain is coming off a strong third quarter, during which sales rose by 6.5%, including a 6.3% rise in comparable store sales.

In today’s marketplace there are a lot of signals investors put to use to appraise their holdings. Two of the less known signals are hedge fund and insider trading sentiment. Our researchers have shown that, historically, those who follow the top picks of the elite money managers can beat the market by a very impressive amount (see the details here).

What have hedge funds been doing with Darden Restaurants, Inc. (NYSE:DRI)?

At the end of the second quarter, a total of 25 of the hedge funds tracked by Insider Monkey were long this stock, a dip of 11% from one quarter earlier. On the other hand, there were a total of 23 hedge funds with bullish positions in DRI a year earlier. With hedgies’ capital changing hands, there exists a few noteworthy hedge fund managers who were increasing their holdings significantly (or already accumulated large positions). 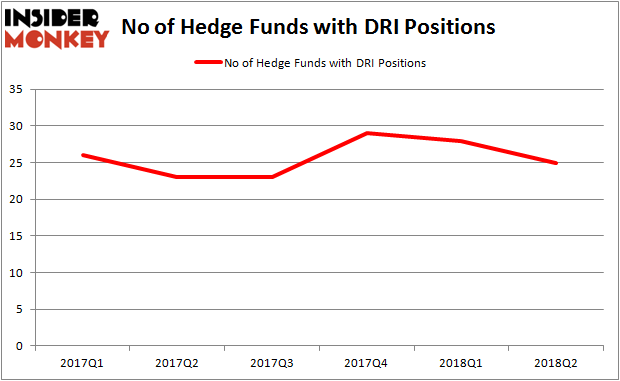 Among these funds, AQR Capital Management held the most valuable stake in Darden Restaurants, Inc. (NYSE:DRI), which was worth $444.5 million at the end of the second quarter. On the second spot was Israel Englander’s Millennium Management, which held $137.8 million worth of shares. Moreover, DSAM Partners, Shellback Capital, and Moore Global Investments were also bullish on Darden Restaurants, Inc. (NYSE:DRI), allocating a large percentage of their portfolios to this stock.

Because Darden Restaurants, Inc. (NYSE:DRI) has experienced bearish sentiment from hedge fund managers, logic holds that there were a few hedge funds that elected to cut their full holdings last quarter. At the top of the heap, Gabriel Plotkin’s Melvin Capital Management dumped the largest investment of the “upper crust” of funds followed by Insider Monkey, totaling about $55.4 million in stock, and Anand Parekh’s Alyeska Investment Group was right behind this move, as the fund dropped about $37.1 million worth of shares. These bearish behaviors are important to note, as total hedge fund interest fell by 3 funds last quarter.

As you can see these stocks had an average of 29 hedge funds with bullish positions and the average amount invested in these stocks was $1.31 billion. That figure was $1.11 billion in DRI’s case. Raymond James Financial, Inc. (NYSE:RJF) is the most popular stock in this table. Compared to these stocks Darden Restaurants, Inc. (NYSE:DRI) is the least popular, though it’s also not far removed from the top. Considering it has the backing of several prominent investors and continues to snatch market share away from competitors, it may be a good idea to consider it for a place in your portfolio.