There are several ways to beat the market, and investing in small cap stocks has historically been one of them. We like to improve the odds of beating the market further by examining what famous hedge fund operators such as Carl Icahn and George Soros think. Those hedge fund operators make billions of dollars each year by hiring the best and the brightest to do research on stocks, including small cap stocks that big brokerage houses simply don’t cover. Because of Carl Icahn and other elite funds’ exemplary historical records, we pay attention to their small cap picks. In this article, we use hedge fund filing data to analyze Nomad Foods Limited (NYSE:NOMD).

Nomad Foods Limited (NYSE:NOMD) was owned by 34 of the hedge funds tracked by our system on September 30, rising by 13% in Q3. That also represented the second consecutive quarter of net hedge fund buying after two quarters of selling. Jay Petschek and Steven Major’s Corsair Capital Management owned a $9.39 million position in NOMD at the end of September and likes how the company has diversified its product offerings through acquisitions.

“Nomad Foods (“NOMD”) rose 22% in the quarter as a “beat and raise” Q1 earnings report along with the continued execution of its accretive M&A strategy pushed the stock higher. In early Q2, NOMD announced strong Q1 results with organic growth of 2.9% and adjusted EPS growth of 40% year on year, resulting in management taking up the bottom end of its Fiscal Year 2018 guidance. Then, in early June, NOMD announced the acquisition of Aunt Bessie’s Ltd. for €240MM. Aunt Bessie’s is a leader in the UK frozen puddings and potatoes market, which will help diversify NOMD’s product and geographic exposure. The deal is expected to be immediately accretive and was financed with cash as well as a term loan that priced better than initially expected. In short, NOMD, which we had written up in our Q4 2016 letter, has succeeded in repositioning itself for above-market growth by redoubling its effort in its core categories and by executing on its frozen food M&A strategy. NOMD closed the quarter at $19.19,” Corsair Capital Management wrote in the fund’s Q2 investor letter. 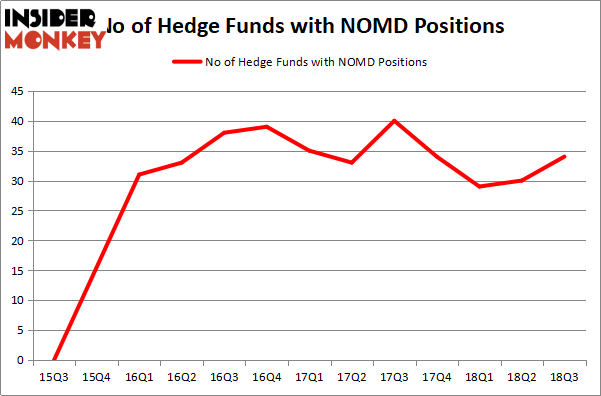 Among these funds, GMT Capital held the most valuable stake in Nomad Foods Limited (NYSE:NOMD), which was worth $53.8 million at the end of the third quarter. On the second spot was Citadel Investment Group which amassed $33.6 million worth of shares. Moreover, Millennium Management, Wallace Capital Management, and Ancora Advisors were also bullish on Nomad Foods Limited (NYSE:NOMD), allocating a large percentage of their portfolios to this stock.

As you can see these stocks had an average of 20 hedge funds with bullish positions and the average amount invested in these stocks was $160 million. That figure was $327 million in NOMD’s case. Energizer Holdings, Inc. (NYSE:ENR) is the most popular stock in this table. On the other hand CNO Financial Group Inc (NYSE:CNO) is the least popular one with only 14 bullish hedge fund positions. Compared to these stocks Nomad Foods Limited (NYSE:NOMD) is more popular among hedge funds. Considering that hedge funds are fond of this stock in relation to its market cap peers, it may be a good idea to analyze it in detail and potentially include it in your portfolio.