The market has been volatile as the Federal Reserve continues its rate hikes to normalize interest rates. Small-cap stocks have been hit hard as a result, as the Russell 2000 ETF (IWM) underperformed the larger S&P 500 ETF (SPY) by about 4 percentage points in October. SEC filings and hedge fund investor letters indicate that the smart money seems to be paring back their overall long exposure and the funds’ movements is one of the reasons why the major indexes have retraced. In this article, we analyze what the smart money thinks of Vistra Energy Corp. (NYSE:VST) and find out how it could be affected by hedge funds’ moves.

Hedge funds continue to buy Vistra Energy in droves, pushing their collective ownership of shares to 29.8% during Q2, as several major funds loaded up on the stock. One of them was David Tepper’s Appaloosa Management, which opened a large new position totaling 1.87 million shares during the second quarter. Appaloosa was just one of several funds managed or founded by billionaires to own the stock on June 30, as it landed 13th on our list of 25 Stocks Billionaires Are Piling On. And what’s not to love, as the stock has gained another 25% in 2018, helped by management’s aggressive plans to return money to shareholders.

Heading into the fourth quarter of 2018, a total of 43 of the hedge funds tracked by Insider Monkey held long positions in this stock, a 23% rise from the first quarter of 2018. There were just 25 hedge funds with bullish positions in VST a year earlier. With hedge funds’ positions undergoing their usual ebb and flow, there exists a few noteworthy hedge fund managers who were increasing their holdings significantly (or already accumulated large positions). 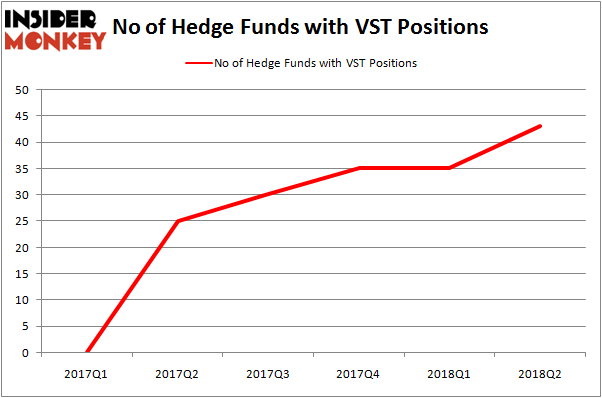 As you can see these stocks had an average of 33 hedge funds with bullish positions and the average amount invested in these stocks was $1.27 billion. That figure was $3.69 billion in VST’s case. United Rentals, Inc. (NYSE:URI) is the most popular stock in this table. On the other hand KKR & Co. L.P. (NYSE:KKR) is the least popular one with only 24 bullish hedge fund positions. Compared to these stocks Vistra Energy Corp. (NYSE:VST) is more popular among hedge funds. Considering that hedge funds and billionaire investors are heavily overweight this stock, it may be a good idea to analyze it in detail and potentially include it in your portfolio.