Is Verisign, Inc. (NASDAQ:VRSN) a good bet right now? We like to analyze hedge fund sentiment before doing days of in-depth research. We do so because hedge funds and other elite investors have numerous Ivy league graduates, expert network advisers, and supply chain tipsters working or consulting for them. There is no shortage of news stories covering failed hedge fund investments and it is a fact that hedge funds’ picks don’t beat the market 100% of the time, but their consensus picks have historically done very well and have outperformed the market after adjusting for risk.

Hedge funds sold out of Verisign in droves during the second quarter, as there was a 38% decline in hedge fund ownership of the stock between March 31 and June 30, a drop of 15 funds. Gains of over 20% during the quarter may have convinced some investors to cut the stock from their portfolios, whether because they felt the valuation had grown too rich, or simply for portfolio reallocation purposes. Interestingly, the wealthiest investors among those hedge funds weren’t among them, as Verisign ranked 11th on the list of 25 Stocks Billionaires Are Piling On. Steve Cohen’s Point72 Asset Management and Paul Tudor Jones’ Tudor Investment Corp. were among the many funds to sell off their VRSN positions in Q2.

In today’s marketplace there are tons of signals investors use to evaluate their stock investments. Two of the most under-the-radar signals are hedge fund and insider trading indicators. Our experts have shown that, historically, those who follow the best picks of the elite money managers can trounce the S&P 500 by a solid margin (see the details here).

How have hedgies been trading Verisign, Inc. (NASDAQ:VRSN)?

At the end of the third quarter, a total of 25 of the hedge funds tracked by Insider Monkey were long this stock, a drop of 38% from one quarter earlier. By comparison, 26 hedge funds held shares or bullish call options in VRSN a year earlier, before a sharp increase. With hedge funds’ positions undergoing their usual ebb and flow, there exists a few notable hedge fund managers who were boosting their holdings considerably (or already accumulated large positions). 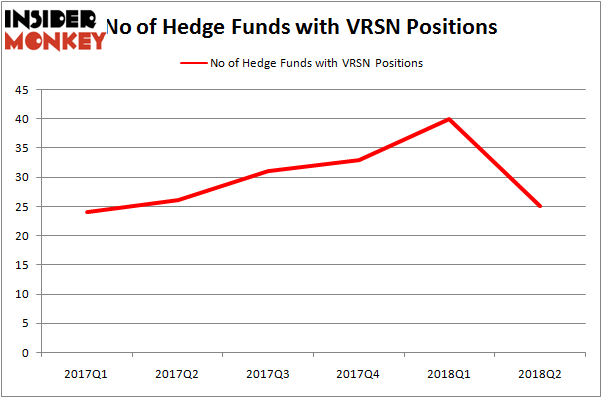 Among these funds, Warren Buffett’s Berkshire Hathaway held the most valuable stake in Verisign, Inc. (NASDAQ:VRSN), which was worth $1.78 billion at the end of the second quarter. On the second spot was Renaissance Technologies which had amassed $950.3 million worth of shares. Moreover, Three Bays Capital and Bridger Management were also bullish on Verisign, Inc. (NASDAQ:VRSN), allocating a large percentage of their 13F portfolios to this stock.

Seeing as Verisign, Inc. (NASDAQ:VRSN) has faced bearish sentiment from hedge fund managers, we can see that there was a specific group of hedge funds who sold off their positions entirely in the second quarter. At the top of the heap, Ken Griffin’s Citadel Investment Group sold off the largest investment of the “upper crust” of funds watched by Insider Monkey, totaling close to $827.3 million in stock. Daniel S. Och’s fund, OZ Management, also said goodbye to its stock, about $127.8 million worth. These bearish behaviors are intriguing to say the least, as total hedge fund interest was cut by 15 funds in the second quarter.

As you can see these stocks had an average of 43 hedge funds with bullish positions and the average amount invested in these stocks was $2.27 billion. That figure was $4.08 billion in VRSN’s case. Dell Technologies Inc. (NASDAQ:DVMT) is the most popular stock in this table. On the other hand TXT is the least popular one with only 25 bullish hedge fund positions. Verisign, Inc. (NASDAQ:VRSN) is not the least popular stock in this group but hedge fund interest is still below average and falling. Considering the stock has continued to push higher in the second-half of 2018, it looks like the billionaire investors were right to hang on to this one a little longer.