Hedge Funds Have Never Been This Bullish On Vonage Holdings Corp. (VG)

How do you pick the next stock to invest in? One way would be to spend hours of research browsing through thousands of publicly traded companies. However, an easier way is to look at the stocks that smart money investors are collectively bullish on. Hedge funds and other institutional investors usually invest large amounts of capital and have to conduct due diligence while choosing their next pick. They don’t always get it right, but, on average, their stock picks historically generated strong returns after adjusting for known risk factors. With this in mind, let’s take a look at the recent hedge fund activity surrounding Vonage Holdings Corp. (NYSE:VG).

Vonage Holdings Corp. (NYSE:VG) was in 34 hedge funds’ portfolios at the end of the first quarter of 2019. VG shareholders have witnessed an increase in hedge fund sentiment in recent months. There were 22 hedge funds in our database with VG positions at the end of the previous quarter. Our calculations also showed that VG isn’t among the 30 most popular stocks among hedge funds. 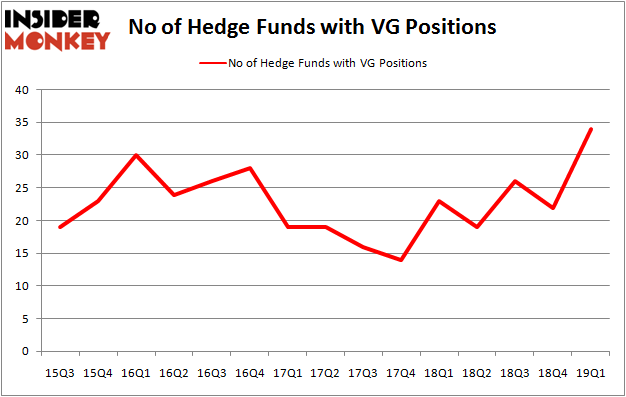 More specifically, Scopia Capital was the largest shareholder of Vonage Holdings Corp. (NYSE:VG), with a stake worth $87 million reported as of the end of March. Trailing Scopia Capital was Legion Partners Asset Management, which amassed a stake valued at $46.9 million. Kerrisdale Capital, Ailanthus Capital Management, and North Fourth Asset Management were also very fond of the stock, giving the stock large weights in their portfolios.

As aggregate interest increased, specific money managers have jumped into Vonage Holdings Corp. (NYSE:VG) headfirst. Scopia Capital, managed by Matt Sirovich and Jeremy Mindich, assembled the most outsized position in Vonage Holdings Corp. (NYSE:VG). Scopia Capital had $87 million invested in the company at the end of the quarter. Genevieve Kahr’s Ailanthus Capital Management also made a $15.6 million investment in the stock during the quarter. The other funds with new positions in the stock are Anthony Joseph Vaccarino’s North Fourth Asset Management, Brandon Haley’s Holocene Advisors, and George McCabe’s Portolan Capital Management.

As you can see these stocks had an average of 15.5 hedge funds with bullish positions and the average amount invested in these stocks was $251 million. That figure was $259 million in VG’s case. Whiting Petroleum Corporation (NYSE:WLL) is the most popular stock in this table. On the other hand ABM Industries, Inc. (NYSE:ABM) is the least popular one with only 8 bullish hedge fund positions. Compared to these stocks Vonage Holdings Corp. (NYSE:VG) is more popular among hedge funds. Our calculations showed that top 20 most popular stocks among hedge funds returned 1.9% in Q2 through May 30th and outperformed the S&P 500 ETF (SPY) by more than 3 percentage points. Hedge funds were also right about betting on VG as the stock returned 16.6% during the same period and outperformed the market by an even larger margin. Hedge funds were clearly right about piling into this stock relative to other stocks with similar market capitalizations.