Hedge Funds Have Never Been This Bullish On Univar Inc (UNVR)

Hedge funds and large money managers usually invest with a focus on the long-term horizon and, therefore, short-lived dips or bumps on the charts, usually don’t make them change their opinion towards a company. This time it may be different. During the fourth quarter of 2018 we observed increased volatility and small-cap stocks underperformed the market. Things completely reversed during the first quarter. Hedge fund investor letters indicated that they are cutting their overall exposure, closing out some position and doubling down on others. Let’s take a look at the hedge fund sentiment towards Univar Inc (NYSE:UNVR) to find out whether it was one of their high conviction long-term ideas.

According to most shareholders, hedge funds are assumed to be slow, old financial tools of yesteryear. While there are greater than 8000 funds in operation today, We hone in on the masters of this club, around 750 funds. These hedge fund managers handle most of the hedge fund industry’s total capital, and by monitoring their finest picks, Insider Monkey has deciphered a number of investment strategies that have historically defeated the broader indices. Insider Monkey’s flagship hedge fund strategy defeated the S&P 500 index by around 5 percentage points annually since its inception in May 2014 through the end of May. We were able to generate large returns even by identifying short candidates. Our portfolio of short stocks lost 30.9% since February 2017 (through May 30th) even though the market was up nearly 24% during the same period. We just shared a list of 5 short targets in our latest quarterly update and they are already down an average of 11.9% in less than a couple of weeks whereas our long picks outperformed the market by 2 percentage points in this volatile 2 week period.

How have hedgies been trading Univar Inc (NYSE:UNVR)? 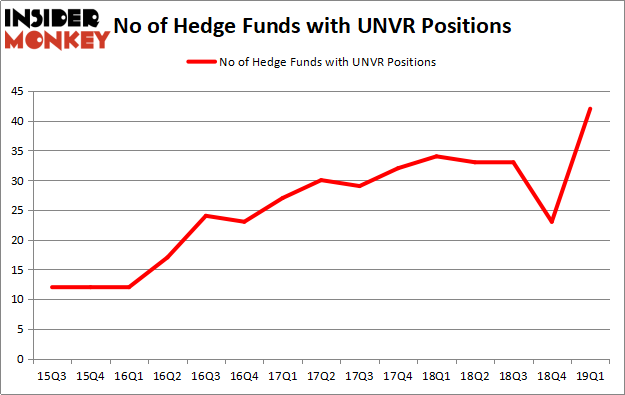 Among these funds, Baupost Group held the most valuable stake in Univar Inc (NYSE:UNVR), which was worth $210.5 million at the end of the first quarter. On the second spot was Longview Asset Management which amassed $195.5 million worth of shares. Moreover, First Pacific Advisors LLC, Glenview Capital, and Valinor Management were also bullish on Univar Inc (NYSE:UNVR), allocating a large percentage of their portfolios to this stock.