Is TransDigm Group Incorporated (NYSE:TDG) a good bet right now? We like to analyze hedge fund sentiment before conducting days of in-depth research. We do so because hedge funds and other elite investors have numerous Ivy League graduates, expert network advisers, and supply chain tipsters working or consulting for them. There is not a shortage of news stories covering failed hedge fund investments and it is a fact that hedge funds’ picks don’t beat the market 100% of the time, but their consensus picks have historically done very well and have outperformed the market after adjusting for risk.

TransDigm Group Incorporated (NYSE:TDG) investors should pay attention to an increase in hedge fund sentiment lately. TDG was in 63 hedge funds’ portfolios at the end of December. There were 60 hedge funds in our database with TDG positions at the end of the previous quarter. Our calculations also showed that TDG isn’t among the 30 most popular stocks among hedge funds (click for Q4 rankings and see the video below for Q3 rankings).

We leave no stone unturned when looking for the next great investment idea. For example Europe is set to become the world’s largest cannabis market, so we check out this European marijuana stock pitch. We read hedge fund investor letters and listen to stock pitches at hedge fund conferences, and and go through short-term trade recommendations like this one. We even check out the recommendations of services with hard to believe track records. In January, we recommended a long position in one of the most shorted stocks in the market, and that stock returned more than 50% despite the large losses in the market since our recommendation. With all of this in mind let’s analyze the new hedge fund action regarding TransDigm Group Incorporated (NYSE:TDG).

Heading into the first quarter of 2020, a total of 63 of the hedge funds tracked by Insider Monkey were bullish on this stock, a change of 5% from the third quarter of 2019. By comparison, 47 hedge funds held shares or bullish call options in TDG a year ago. With the smart money’s sentiment swirling, there exists an “upper tier” of key hedge fund managers who were adding to their holdings significantly (or already accumulated large positions). 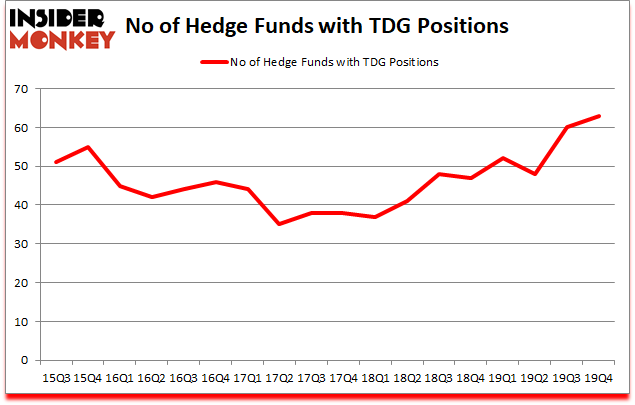 When looking at the institutional investors followed by Insider Monkey, Chase Coleman’s Tiger Global Management LLC has the number one position in TransDigm Group Incorporated (NYSE:TDG), worth close to $1.157 billion, amounting to 6.4% of its total 13F portfolio. Coming in second is Lone Pine Capital, which holds a $702.5 million position; the fund has 3.7% of its 13F portfolio invested in the stock. Other members of the smart money that are bullish contain Sharlyn C. Heslam’s Stockbridge Partners, John Armitage’s Egerton Capital Limited and David Goel and Paul Ferri’s Matrix Capital Management. In terms of the portfolio weights assigned to each position Stockbridge Partners allocated the biggest weight to TransDigm Group Incorporated (NYSE:TDG), around 23.42% of its 13F portfolio. Cat Rock Capital is also relatively very bullish on the stock, dishing out 20.83 percent of its 13F equity portfolio to TDG.

As you can see these stocks had an average of 48.75 hedge funds with bullish positions and the average amount invested in these stocks was $2744 million. That figure was $5539 million in TDG’s case. IQVIA Holdings, Inc. (NYSE:IQV) is the most popular stock in this table. On the other hand Public Service Enterprise Group Incorporated (NYSE:PEG) is the least popular one with only 31 bullish hedge fund positions. TransDigm Group Incorporated (NYSE:TDG) is not the most popular stock in this group but hedge fund interest is still above average. Our calculations showed that top 20 most popular stocks among hedge funds returned 41.3% in 2019 and outperformed the S&P 500 ETF (SPY) by 10.1 percentage points. These stocks also gained 0.1% in 2020 through March 2nd and beat the market by 4.1 percentage points. Hedge funds were also right about betting on TDG as the stock returned 1.5% during the first quarter (through March 2nd) and outperformed the market. Hedge funds were rewarded for their relative bullishness.