Is The Boeing Company (NYSE:BA) a good place to invest some of your money right now? We can gain invaluable insight to help us answer that question by studying the investment trends of top investors, who employ world-class Ivy League graduates, who are given immense resources and industry contacts to put their financial expertise to work. The top picks of these firms have historically outperformed the market when we account for known risk factors, making them very valuable investment ideas.

The Boeing Company (NYSE:BA) was in 71 hedge funds’ portfolios at the end of March. BA has experienced an increase in enthusiasm from smart money in recent months. There were 67 hedge funds in our database with BA positions at the end of the previous quarter. Our calculations also showed that BA isn’t among the 30 most popular stocks among hedge funds.

At Q1’s end, a total of 71 of the hedge funds tracked by Insider Monkey were long this stock, a change of 6% from one quarter earlier. The graph below displays the number of hedge funds with bullish position in BA over the last 15 quarters. With hedgies’ capital changing hands, there exists a few noteworthy hedge fund managers who were upping their holdings substantially (or already accumulated large positions). 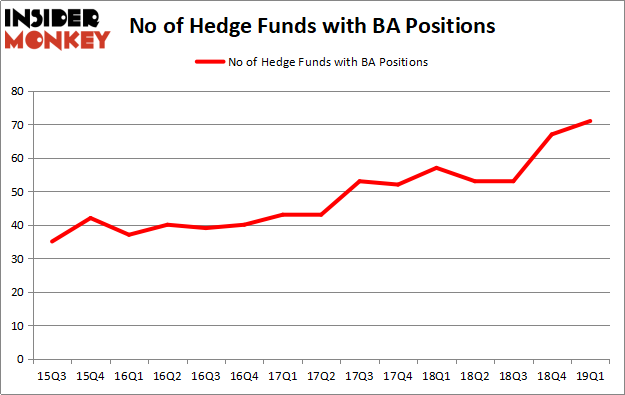 The largest stake in The Boeing Company (NYSE:BA) was held by Citadel Investment Group, which reported holding $898.2 million worth of stock at the end of March. It was followed by AQR Capital Management with a $505.5 million position. Other investors bullish on the company included Arrowstreet Capital, Egerton Capital Limited, and Adage Capital Management.

Let’s now take a look at hedge fund activity in other stocks similar to The Boeing Company (NYSE:BA). We will take a look at Merck & Co., Inc. (NYSE:MRK), Taiwan Semiconductor Mfg. Co. Ltd. (NYSE:TSM), China Mobile Limited (NYSE:CHL), and The Coca-Cola Company (NYSE:KO). All of these stocks’ market caps are closest to BA’s market cap.

As you can see these stocks had an average of 42.5 hedge funds with bullish positions and the average amount invested in these stocks was $7310 million. That figure was $4346 million in BA’s case. Merck & Co., Inc. (NYSE:MRK) is the most popular stock in this table. On the other hand China Mobile Limited (NYSE:CHL) is the least popular one with only 19 bullish hedge fund positions. Compared to these stocks The Boeing Company (NYSE:BA) is more popular among hedge funds. Our calculations showed that top 20 most popular stocks among hedge funds returned 1.9% in Q2 through May 30th and outperformed the S&P 500 ETF (SPY) by more than 3 percentage points. Unfortunately BA wasn’t nearly as popular as these 20 stocks and hedge funds that were betting on BA were disappointed as the stock returned -7.7% during the same period and underperformed the market. If you are interested in investing in large cap stocks with huge upside potential, you should check out the top 20 most popular stocks among hedge funds as 13 of these stocks already outperformed the market in Q2.

Hedge Funds Have Never Been This Bullish On Red Hat, Inc. (RHT)
Monthly Newsletter Strategy
Download a free copy of our newsletter and see the details inside!
Hedge Fund Resource Center
Related News
30 Most Popular Stocks Among Hedge Funds in Q1 of 2019 Boeing, Alphabet, Tesla, and More: Why These Stocks Are in the Spotlight 5 Ways Hedge Funds Are Playing the Space Trend How the Smart Money is Playing This Trillion Dollar Opportunity These Five Stocks Are Trending 5 American Companies that Will Benefit From the End of the Trade War Boeing Could be An Opportunity. Here’s What Hedge Funds Think 17 Best Excuses to Get Out of Work 25 Best Bumble Bios For Girls 30 Most Popular Stocks Among Hedge Funds in Q1 of 2019
Billionaire Hedge Funds