Hedge Funds Have Never Been This Bullish On Tallgrass Energy, LP (TGE)

It seems that the masses and most of the financial media hate hedge funds and what they do, but why is this hatred of hedge funds so prominent? At the end of the day, these asset management firms do not gamble the hard-earned money of the people who are on the edge of poverty. Truth be told, most hedge fund managers and other smaller players within this industry are very smart and skilled investors. Of course, they may also make wrong bets in some instances, but no one knows what the future holds and how market participants will react to the bountiful news that floods in each day. The Standard and Poor’s 500 Index returned approximately 12.1% in the first 5 months of this year (through May 30th). Conversely, hedge funds’ top 20 large-cap stock picks generated a return of 18.7% during the same 5-month period, with the majority of these stock picks outperforming the broader market benchmark. Coincidence? It might happen to be so, but it is unlikely. Our research covering the last 18 years indicates that hedge funds’ stock picks generate superior risk-adjusted returns. That’s why we believe it isn’t a waste of time to check out hedge fund sentiment before you invest in a stock like Tallgrass Energy, LP (NYSE:TGE).

Tallgrass Energy, LP (NYSE:TGE) investors should pay attention to an increase in support from the world’s most elite money managers recently. Our calculations also showed that TGE isn’t among the 30 most popular stocks among hedge funds.

How have hedgies been trading Tallgrass Energy, LP (NYSE:TGE)? 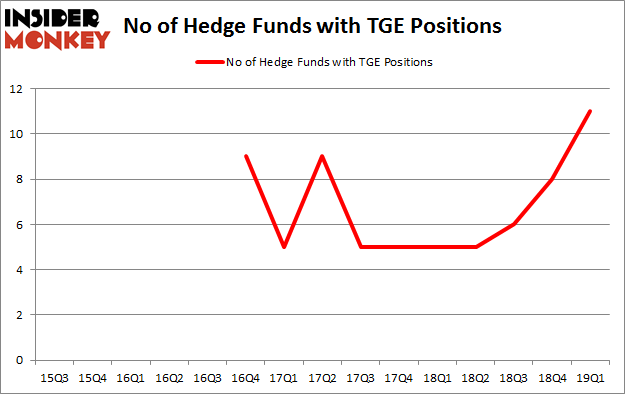 According to publicly available hedge fund and institutional investor holdings data compiled by Insider Monkey, Zimmer Partners, managed by Stuart J. Zimmer, holds the most valuable position in Tallgrass Energy, LP (NYSE:TGE). Zimmer Partners has a $14.7 million position in the stock, comprising 0.2% of its 13F portfolio. Sitting at the No. 2 spot is Citadel Investment Group, led by Ken Griffin, holding a $10.1 million call position; the fund has less than 0.1%% of its 13F portfolio invested in the stock. Other professional money managers that are bullish consist of James H. Litinsky’s JHL Capital Group, Steve Cohen’s Point72 Asset Management and Gavin Saitowitz and Cisco J. del Valle’s Springbok Capital.

Now, key money managers were breaking ground themselves. Zimmer Partners, managed by Stuart J. Zimmer, assembled the biggest position in Tallgrass Energy, LP (NYSE:TGE). Zimmer Partners had $14.7 million invested in the company at the end of the quarter. James H. Litinsky’s JHL Capital Group also made a $8 million investment in the stock during the quarter. The other funds with new positions in the stock are Steve Cohen’s Point72 Asset Management, Gavin Saitowitz and Cisco J. del Valle’s Springbok Capital, and David Harding’s Winton Capital Management.

As you can see these stocks had an average of 27.25 hedge funds with bullish positions and the average amount invested in these stocks was $1197 million. That figure was $36 million in TGE’s case. Berry Global Group Inc (NYSE:BERY) is the most popular stock in this table. On the other hand Carlisle Companies, Inc. (NYSE:CSL) is the least popular one with only 22 bullish hedge fund positions. Compared to these stocks Tallgrass Energy, LP (NYSE:TGE) is even less popular than CSL. Hedge funds dodged a bullet by taking a bearish stance towards TGE. Our calculations showed that the top 20 most popular hedge fund stocks returned 6.2% in Q2 through June 19th and outperformed the S&P 500 ETF (SPY) by nearly 3 percentage points. Unfortunately TGE wasn’t nearly as popular as these 20 stocks (hedge fund sentiment was very bearish); TGE investors were disappointed as the stock returned -12.3% during the same time frame and underperformed the market. If you are interested in investing in large cap stocks with huge upside potential, you should check out the top 20 most popular stocks among hedge funds as 13 of these stocks already outperformed the market so far in the second quarter.

Hedge Funds Have Never Been This Bullish On Central Puerto S.A. (CEPU)
Monthly Newsletter Strategy
Download a free copy of our newsletter and see the details inside!
Hedge Fund Resource Center
Related News
Is Tallgrass Energy (TGE) A Good Stock To Buy According To Hedge Funds? 25 Biggest Activist Short Sellers in the Hedge Fund World 21 Best Tinder Bio Examples for Newly Single Moms 17 Best Excuses to Get Out of Work
Billionaire Hedge Funds