Hedge Funds Have Never Been This Bullish On Southwest Gas Holdings, Inc. (SWX)

Hedge funds are not perfect. They have their bad picks just like everyone else. Facebook, a stock hedge funds have loved dearly, lost nearly 40% of its value at one point in 2018. Although hedge funds are not perfect, their consensus picks do deliver solid returns, however. Our data show the top 20 S&P 500 stocks among hedge funds beat the S&P 500 Index by more than 6 percentage points so far in 2019. Because hedge funds have a lot of resources and their consensus picks do well, we pay attention to what they think. In this article, we analyze what the elite funds think of Southwest Gas Holdings, Inc. (NYSE:SWX).

Is Southwest Gas Holdings, Inc. (NYSE:SWX) the right investment to pursue these days? Prominent investors are in an optimistic mood. The number of bullish hedge fund positions rose by 3 in recent months. Our calculations also showed that SWX isn’t among the 30 most popular stocks among hedge funds. SWX was in 20 hedge funds’ portfolios at the end of March. There were 17 hedge funds in our database with SWX positions at the end of the previous quarter.

How have hedgies been trading Southwest Gas Holdings, Inc. (NYSE:SWX)? 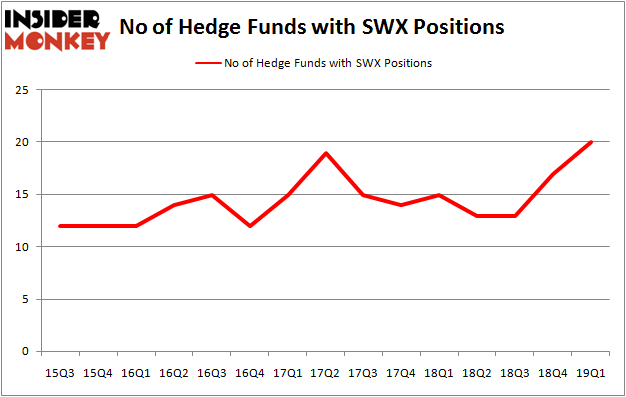 According to publicly available hedge fund and institutional investor holdings data compiled by Insider Monkey, Mario Gabelli’s GAMCO Investors has the biggest position in Southwest Gas Holdings, Inc. (NYSE:SWX), worth close to $69.6 million, accounting for 0.5% of its total 13F portfolio. The second most bullish fund manager is Phill Gross and Robert Atchinson of Adage Capital Management, with a $58.7 million position; 0.1% of its 13F portfolio is allocated to the company. Some other members of the smart money that hold long positions include Cliff Asness’s AQR Capital Management, Jonathan Barrett and Paul Segal’s Luminus Management and Ken Griffin’s Citadel Investment Group.

As one would reasonably expect, specific money managers were breaking ground themselves. Shelter Harbor Advisors, managed by Peter J. Hark, initiated the most valuable position in Southwest Gas Holdings, Inc. (NYSE:SWX). Shelter Harbor Advisors had $4.1 million invested in the company at the end of the quarter. Israel Englander’s Millennium Management also made a $3.8 million investment in the stock during the quarter. The other funds with new positions in the stock are Michael Platt and William Reeves’s BlueCrest Capital Mgmt., Peter Algert and Kevin Coldiron’s Algert Coldiron Investors, and Hoon Kim’s Quantinno Capital.

As you can see these stocks had an average of 18.5 hedge funds with bullish positions and the average amount invested in these stocks was $271 million. That figure was $208 million in SWX’s case. SLM Corp (NASDAQ:SLM) is the most popular stock in this table. On the other hand Hospitality Properties Trust (NASDAQ:HPT) is the least popular one with only 11 bullish hedge fund positions. Southwest Gas Holdings, Inc. (NYSE:SWX) is not the most popular stock in this group but hedge fund interest is still above average. Our calculations showed that top 20 most popular stocks among hedge funds returned 1.9% in Q2 through May 30th and outperformed the S&P 500 ETF (SPY) by more than 3 percentage points. Hedge funds were also right about betting on SWX as the stock returned 2.5% during the same period and outperformed the market by an even larger margin. Hedge funds were rewarded for their relative bullishness.