In this article you are going to find out whether hedge funds think Sibanye Stillwater Limited (NYSE:SBSW) is a good investment right now. We like to check what the smart money thinks first before doing extensive research on a given stock. Although there have been several high profile failed hedge fund picks, the consensus picks among hedge fund investors have historically outperformed the market after adjusting for known risk attributes. It’s not surprising given that hedge funds have access to better information and more resources to predict the winners in the stock market.

Is Sibanye Stillwater Limited (NYSE:SBSW) a bargain? The smart money is getting more optimistic. The number of long hedge fund bets moved up by 6 lately. Our calculations also showed that SBSW isn’t among the 30 most popular stocks among hedge funds (click for Q1 rankings and see the video for a quick look at the top 5 stocks). SBSW was in 19 hedge funds’ portfolios at the end of March. There were 13 hedge funds in our database with SBSW holdings at the end of the previous quarter.

We leave no stone unturned when looking for the next great investment idea. For example Europe is set to become the world’s largest cannabis market, so we check out this European marijuana stock pitch. We interview hedge fund managers and ask them about their best ideas. If you want to find out the best healthcare stock to buy right now, you can watch our latest hedge fund manager interview here. We read hedge fund investor letters and listen to stock pitches at hedge fund conferences. Our best call in 2020 was shorting the market when the S&P 500 was trading at 3150 after realizing the coronavirus pandemic’s significance before most investors. With all of this in mind let’s take a gander at the fresh hedge fund action regarding Sibanye Stillwater Limited (NYSE:SBSW).

How have hedgies been trading Sibanye Stillwater Limited (NYSE:SBSW)? 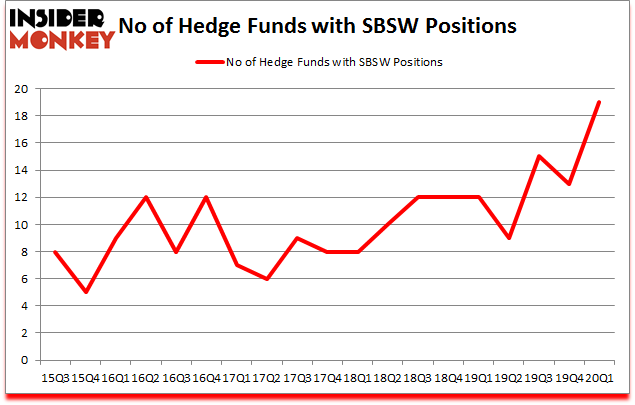 More specifically, Renaissance Technologies was the largest shareholder of Sibanye Stillwater Limited (NYSE:SBSW), with a stake worth $29.5 million reported as of the end of September. Trailing Renaissance Technologies was GLG Partners, which amassed a stake valued at $18.2 million. Encompass Capital Advisors, Maple Rock Capital, and Arrowstreet Capital were also very fond of the stock, becoming one of the largest hedge fund holders of the company. In terms of the portfolio weights assigned to each position Maple Rock Capital allocated the biggest weight to Sibanye Stillwater Limited (NYSE:SBSW), around 1.69% of its 13F portfolio. Encompass Capital Advisors is also relatively very bullish on the stock, dishing out 1.46 percent of its 13F equity portfolio to SBSW.

As one would reasonably expect, specific money managers were breaking ground themselves. Encompass Capital Advisors, managed by Todd J. Kantor, created the largest position in Sibanye Stillwater Limited (NYSE:SBSW). Encompass Capital Advisors had $13.6 million invested in the company at the end of the quarter. Len Kipp and Xavier Majic’s Maple Rock Capital also made a $6.6 million investment in the stock during the quarter. The other funds with brand new SBSW positions are Eric Sprott’s Sprott Asset Management, Paul Tudor Jones’s Tudor Investment Corp, and Paul Marshall and Ian Wace’s Marshall Wace LLP.

As you can see these stocks had an average of 25 hedge funds with bullish positions and the average amount invested in these stocks was $298 million. That figure was $84 million in SBSW’s case. Blueprint Medicines Corporation (NASDAQ:BPMC) is the most popular stock in this table. On the other hand Glacier Bancorp, Inc. (NASDAQ:GBCI) is the least popular one with only 12 bullish hedge fund positions. Sibanye Stillwater Limited (NYSE:SBSW) is not the least popular stock in this group but hedge fund interest is still below average. Our calculations showed that top 10 most popular stocks among hedge funds returned 41.4% in 2019 and outperformed the S&P 500 ETF (SPY) by 10.1 percentage points. These stocks gained 13.4% in 2020 through June 22nd and still beat the market by 15.9 percentage points. A small number of hedge funds were also right about betting on SBSW as the stock returned 78.1% during the second quarter and outperformed the market by an even larger margin.