A whopping number of 13F filings filed with U.S. Securities and Exchange Commission has been processed by Insider Monkey so that individual investors can look at the overall hedge fund sentiment towards the stocks included in their watchlists. These freshly-submitted public filings disclose money managers’ equity positions as of the end of the three-month period that ended March 31, so let’s proceed with the discussion of the hedge fund sentiment on Moelis & Company (NYSE:MC).

Is Moelis & Company (NYSE:MC) a bargain? Investors who are in the know are taking a bullish view. The number of long hedge fund positions increased by 2 lately. Our calculations also showed that mc isn’t among the 30 most popular stocks among hedge funds. MC was in 23 hedge funds’ portfolios at the end of March. There were 21 hedge funds in our database with MC holdings at the end of the previous quarter.

What does the smart money think about Moelis & Company (NYSE:MC)? 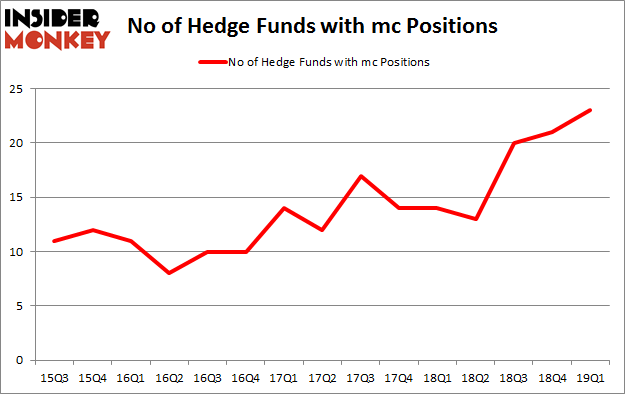 The largest stake in Moelis & Company (NYSE:MC) was held by Highline Capital Management, which reported holding $45.2 million worth of stock at the end of March. It was followed by Royce & Associates with a $18.1 million position. Other investors bullish on the company included Marshall Wace LLP, Millennium Management, and Strycker View Capital.

As one would reasonably expect, specific money managers have been driving this bullishness. Highline Capital Management, managed by Jacob Doft, assembled the largest position in Moelis & Company (NYSE:MC). Highline Capital Management had $45.2 million invested in the company at the end of the quarter. Usman Waheed’s Strycker View Capital also initiated a $4.6 million position during the quarter. The other funds with new positions in the stock are Richard Mashaal’s Rima Senvest Management, Noam Gottesman’s GLG Partners, and Michael Platt and William Reeves’s BlueCrest Capital Mgmt..

As you can see these stocks had an average of 20.75 hedge funds with bullish positions and the average amount invested in these stocks was $196 million. That figure was $123 million in MC’s case. Dillard’s, Inc. (NYSE:DDS) is the most popular stock in this table. On the other hand Northwest Natural Holding Company (NYSE:NWN) is the least popular one with only 11 bullish hedge fund positions. Moelis & Company (NYSE:MC) is not the most popular stock in this group but hedge fund interest is still above average. This is a slightly positive signal but we’d rather spend our time researching stocks that hedge funds are piling on. Our calculations showed that top 20 most popular stocks among hedge funds returned 1.9% in Q2 through May 30th and outperformed the S&P 500 ETF (SPY) by more than 3 percentage points. Unfortunately MC wasn’t nearly as popular as these 20 stocks and hedge funds that were betting on MC were disappointed as the stock returned -20.7% during the same period and underperformed the market. If you are interested in investing in large cap stocks with huge upside potential, you should check out the top 20 most popular stocks among hedge funds as 13 of these stocks already outperformed the market so far in Q2.