Hedge Funds Have Never Been This Bullish On Mimecast Limited (MIME)

A whopping number of 13F filings filed with U.S. Securities and Exchange Commission has been processed by Insider Monkey so that individual investors can look at the overall hedge fund sentiment towards the stocks included in their watchlists. These freshly-submitted public filings disclose money managers’ equity positions as of the end of the three-month period that ended March 31, so let’s proceed with the discussion of the hedge fund sentiment on Mimecast Limited (NASDAQ:MIME).

Mimecast Limited (NASDAQ:MIME) investors should pay attention to an increase in hedge fund sentiment in recent months. MIME was in 35 hedge funds’ portfolios at the end of March. There were 23 hedge funds in our database with MIME positions at the end of the previous quarter. Our calculations also showed that MIME isn’t among the 30 most popular stocks among hedge funds.

We’re going to take a peek at the latest hedge fund action regarding Mimecast Limited (NASDAQ:MIME).

What have hedge funds been doing with Mimecast Limited (NASDAQ:MIME)?

Heading into the second quarter of 2019, a total of 35 of the hedge funds tracked by Insider Monkey were bullish on this stock, a change of 52% from one quarter earlier. By comparison, 20 hedge funds held shares or bullish call options in MIME a year ago. With hedgies’ positions undergoing their usual ebb and flow, there exists an “upper tier” of noteworthy hedge fund managers who were upping their stakes considerably (or already accumulated large positions). 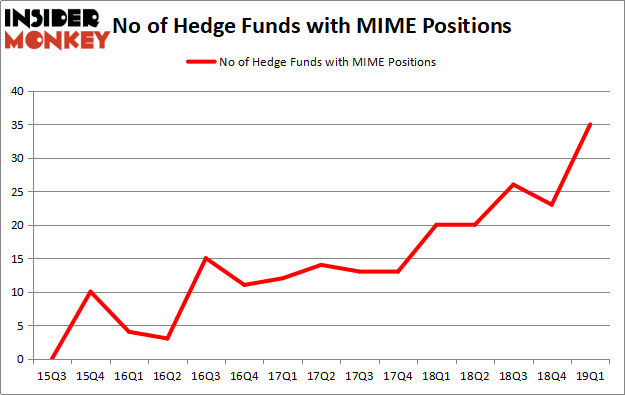 More specifically, Abdiel Capital Advisors was the largest shareholder of Mimecast Limited (NASDAQ:MIME), with a stake worth $203.9 million reported as of the end of March. Trailing Abdiel Capital Advisors was Whale Rock Capital Management, which amassed a stake valued at $94.3 million. Renaissance Technologies, Holocene Advisors, and SQN Investors were also very fond of the stock, giving the stock large weights in their portfolios.