Hedge Funds Have Never Been This Bullish On Mersana Therapeutics, Inc. (MRSN)

The 700+ hedge funds and famous money managers tracked by Insider Monkey have already compiled and submitted their 13F filings for the first quarter, which unveil their equity positions as of March 31. We went through these filings, fixed typos and other more significant errors and identified the changes in hedge fund portfolios. Our extensive review of these public filings is finally over, so this article is set to reveal the smart money sentiment towards Mersana Therapeutics, Inc. (NASDAQ:MRSN).

Is Mersana Therapeutics, Inc. (NASDAQ:MRSN) the right investment to pursue these days? Prominent investors are becoming more confident. The number of long hedge fund positions moved up by 12 lately. Our calculations also showed that mrsn isn’t among the 30 most popular stocks among hedge funds.

In the 21st century investor’s toolkit there are many metrics stock traders have at their disposal to analyze their stock investments. Two of the less utilized metrics are hedge fund and insider trading sentiment. Our researchers have shown that, historically, those who follow the best picks of the top investment managers can beat the S&P 500 by a superb amount (see the details here).

Heading into the second quarter of 2019, a total of 16 of the hedge funds tracked by Insider Monkey held long positions in this stock, a change of 300% from the previous quarter. On the other hand, there were a total of 5 hedge funds with a bullish position in MRSN a year ago. With the smart money’s capital changing hands, there exists a select group of noteworthy hedge fund managers who were adding to their holdings meaningfully (or already accumulated large positions). 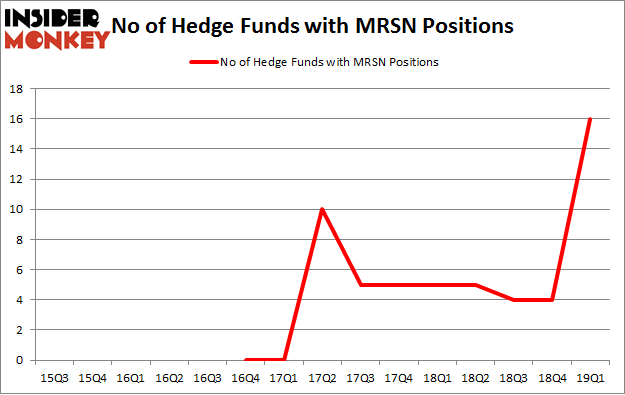 More specifically, Sarissa Capital Management was the largest shareholder of Mersana Therapeutics, Inc. (NASDAQ:MRSN), with a stake worth $19.7 million reported as of the end of March. Trailing Sarissa Capital Management was Biotechnology Value Fund / BVF Inc, which amassed a stake valued at $13.2 million. EcoR1 Capital, OrbiMed Advisors, and Point72 Asset Management were also very fond of the stock, giving the stock large weights in their portfolios.

As one would reasonably expect, specific money managers were breaking ground themselves. Sarissa Capital Management, managed by Alex Denner, created the biggest position in Mersana Therapeutics, Inc. (NASDAQ:MRSN). Sarissa Capital Management had $19.7 million invested in the company at the end of the quarter. Mark Lampert’s Biotechnology Value Fund / BVF Inc also made a $13.2 million investment in the stock during the quarter. The following funds were also among the new MRSN investors: Oleg Nodelman’s EcoR1 Capital, Samuel Isaly’s OrbiMed Advisors, and Nathan Fischel’s DAFNA Capital Management.

As you can see these stocks had an average of 8.75 hedge funds with bullish positions and the average amount invested in these stocks was $35 million. That figure was $76 million in MRSN’s case. Sientra Inc (NASDAQ:SIEN) is the most popular stock in this table. On the other hand Dova Pharmaceuticals, Inc. (NASDAQ:DOVA) is the least popular one with only 4 bullish hedge fund positions. Compared to these stocks Mersana Therapeutics, Inc. (NASDAQ:MRSN) is more popular among hedge funds. Our calculations showed that top 20 most popular stocks among hedge funds returned 6.2% in Q2 through June 19th and outperformed the S&P 500 ETF (SPY) by nearly 3 percentage points. Unfortunately MRSN wasn’t nearly as popular as these 20 stocks and hedge funds that were betting on MRSN were disappointed as the stock returned -21.5% during the same period and underperformed the market. If you are interested in investing in large cap stocks with huge upside potential, you should check out the top 20 most popular stocks among hedge funds as 13 of these stocks already outperformed the market in Q2.