We can judge whether Lincoln National Corporation (NYSE:LNC) is a good investment right now by following the lead of some of the best investors in the world and piggybacking their ideas. There’s no better way to get these firms’ immense resources and analytical capabilities working for us than to follow their lead into their best ideas. While not all of these picks will be winners, our research shows that these picks historically outperformed the market when we factor in known risk factors.

Is Lincoln National Corporation (NYSE:LNC) going to take off soon? Money managers are getting more optimistic. The number of long hedge fund bets moved up by 7 recently. Our calculations also showed that lnc isn’t among the 30 most popular stocks among hedge funds. LNC was in 40 hedge funds’ portfolios at the end of March. There were 33 hedge funds in our database with LNC holdings at the end of the previous quarter.

How have hedgies been trading Lincoln National Corporation (NYSE:LNC)?

Heading into the second quarter of 2019, a total of 40 of the hedge funds tracked by Insider Monkey held long positions in this stock, a change of 21% from the previous quarter. Below, you can check out the change in hedge fund sentiment towards LNC over the last 15 quarters. With hedgies’ positions undergoing their usual ebb and flow, there exists an “upper tier” of key hedge fund managers who were increasing their holdings considerably (or already accumulated large positions). 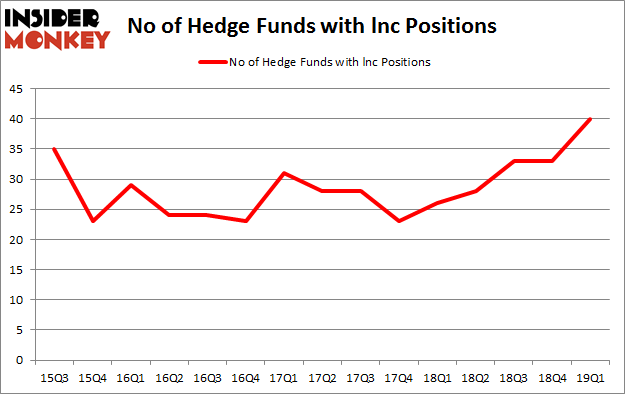 According to publicly available hedge fund and institutional investor holdings data compiled by Insider Monkey, Millennium Management, managed by Israel Englander, holds the number one position in Lincoln National Corporation (NYSE:LNC). Millennium Management has a $93.9 million position in the stock, comprising 0.1% of its 13F portfolio. The second largest stake is held by Peter Rathjens, Bruce Clarke and John Campbell of Arrowstreet Capital, with a $88.8 million position; the fund has 0.2% of its 13F portfolio invested in the stock. Other members of the smart money that hold long positions encompass Noam Gottesman’s GLG Partners, Steven Richman’s East Side Capital (RR Partners) and Cliff Asness’s AQR Capital Management.

As you can see these stocks had an average of 29.75 hedge funds with bullish positions and the average amount invested in these stocks was $736 million. That figure was $564 million in LNC’s case. Wabtec Corporation (NYSE:WAB) is the most popular stock in this table. On the other hand The AES Corporation (NYSE:AES) is the least popular one with only 24 bullish hedge fund positions. Compared to these stocks Lincoln National Corporation (NYSE:LNC) is more popular among hedge funds. Our calculations showed that top 20 most popular stocks among hedge funds returned 1.9% in Q2 through May 30th and outperformed the S&P 500 ETF (SPY) by more than 3 percentage points. Hedge funds were also right about betting on LNC as the stock returned 5.8% during the same period and outperformed the market by an even larger margin. Hedge funds were clearly right about piling into this stock relative to other stocks with similar market capitalizations.