Is InterXion Holding NV (NYSE:INXN) a good equity to bet on right now? We like to check what the smart money thinks first before doing extensive research on a given stock. Although there have been several high profile failed hedge fund picks, the consensus picks among hedge fund investors have historically outperformed the market after adjusting for known risk attributes. It’s not surprising given that hedge funds have access to better information and more resources to predict the winners in the stock market.

InterXion Holding NV (NYSE:INXN) investors should pay attention to an increase in hedge fund interest recently. Our calculations also showed that INXN isn’t among the 30 most popular stocks among hedge funds (click for Q4 rankings and see the video below for Q3 rankings).

In the eyes of most investors, hedge funds are seen as slow, old financial tools of the past. While there are over 8000 funds trading at the moment, We hone in on the aristocrats of this group, around 850 funds. It is estimated that this group of investors direct most of the hedge fund industry’s total asset base, and by watching their inimitable equity investments, Insider Monkey has figured out several investment strategies that have historically outpaced the market. Insider Monkey’s flagship short hedge fund strategy outrun the S&P 500 short ETFs by around 20 percentage points annually since its inception in March 2017. Our portfolio of short stocks lost 35.3% since February 2017 (through March 3rd) even though the market was up more than 35% during the same period. We just shared a list of 7 short targets in our latest quarterly update .

We leave no stone unturned when looking for the next great investment idea. For example Europe is set to become the world’s largest cannabis market, so we check out this European marijuana stock pitch. We read hedge fund investor letters and listen to stock pitches at hedge fund conferences, and and go through short-term trade recommendations like this one. We even check out the recommendations of services with hard to believe track records. In January, we recommended a long position in one of the most shorted stocks in the market, and that stock returned more than 50% despite the large losses in the market since our recommendation. Now we’re going to review the latest hedge fund action encompassing InterXion Holding NV (NYSE:INXN).

At the end of the fourth quarter, a total of 60 of the hedge funds tracked by Insider Monkey were long this stock, a change of 82% from the third quarter of 2019. The graph below displays the number of hedge funds with bullish position in INXN over the last 18 quarters. With hedge funds’ sentiment swirling, there exists a few key hedge fund managers who were increasing their holdings significantly (or already accumulated large positions). 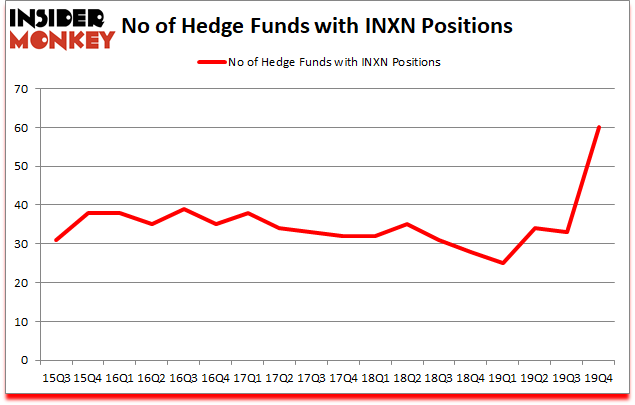 When looking at the institutional investors followed by Insider Monkey, Citadel Investment Group, managed by Ken Griffin, holds the largest position in InterXion Holding NV (NYSE:INXN). Citadel Investment Group has a $83.9 million position in the stock, comprising less than 0.1%% of its 13F portfolio. The second largest stake is held by Alpine Associates, managed by Robert Emil Zoellner, which holds a $78.4 million position; 2.5% of its 13F portfolio is allocated to the company. Remaining peers with similar optimism consist of Ricky Sandler’s Eminence Capital, Josh Resnick’s Jericho Capital Asset Management and Benjamin Pass’s TOMS Capital. In terms of the portfolio weights assigned to each position Portsea Asset Management allocated the biggest weight to InterXion Holding NV (NYSE:INXN), around 18.82% of its 13F portfolio. TOMS Capital is also relatively very bullish on the stock, dishing out 8.66 percent of its 13F equity portfolio to INXN.

As you can see these stocks had an average of 30.25 hedge funds with bullish positions and the average amount invested in these stocks was $680 million. That figure was $1329 million in INXN’s case. Flex Ltd. (NASDAQ:FLEX) is the most popular stock in this table. On the other hand Arrowhead Research Corp (NASDAQ:ARWR) is the least popular one with only 26 bullish hedge fund positions. Compared to these stocks InterXion Holding NV (NYSE:INXN) is more popular among hedge funds. Our calculations showed that top 20 most popular stocks among hedge funds returned 41.3% in 2019 and outperformed the S&P 500 ETF (SPY) by 10.1 percentage points. These stocks lost 12.9% in 2020 through March 9th but still managed to beat the market by 1.9 percentage points. Hedge funds were also right about betting on INXN as the stock returned 1.8% so far in Q1 (through March 9th) and outperformed the market by an even larger margin. Hedge funds were clearly right about piling into this stock relative to other stocks with similar market capitalizations.