Hedge Funds Have Never Been This Bullish On Hilton Grand Vacations Inc. (HGV)

The latest 13F reporting period has come and gone, and Insider Monkey is again at the forefront when it comes to making use of this gold mine of data. We at Insider Monkey have plowed through 752 13F filings that hedge funds and well-known value investors are required to file by the SEC. The 13F filings show the funds’ and investors’ portfolio positions as of September 30th. In this article we look at what those investors think of Hilton Grand Vacations Inc. (NYSE:HGV).

Is Hilton Grand Vacations Inc. (NYSE:HGV) undervalued? Hedge funds are in a bullish mood. The number of bullish hedge fund bets improved by 5 in recent months. Our calculations also showed that HGV isn’t among the 30 most popular stocks among hedge funds.

Unlike the largest US hedge funds that are convinced Dow will soar past 40,000 or the world’s most bearish hedge fund that’s more convinced than ever that a crash is coming, our long-short investment strategy doesn’t rely on bull or bear markets to deliver double digit returns. We only rely on the best performing hedge funds‘ buy/sell signals. Let’s check out the fresh hedge fund action surrounding Hilton Grand Vacations Inc. (NYSE:HGV).

At Q3’s end, a total of 42 of the hedge funds tracked by Insider Monkey were bullish on this stock, a change of 14% from one quarter earlier. On the other hand, there were a total of 27 hedge funds with a bullish position in HGV a year ago. With hedge funds’ sentiment swirling, there exists an “upper tier” of notable hedge fund managers who were increasing their holdings meaningfully (or already accumulated large positions). 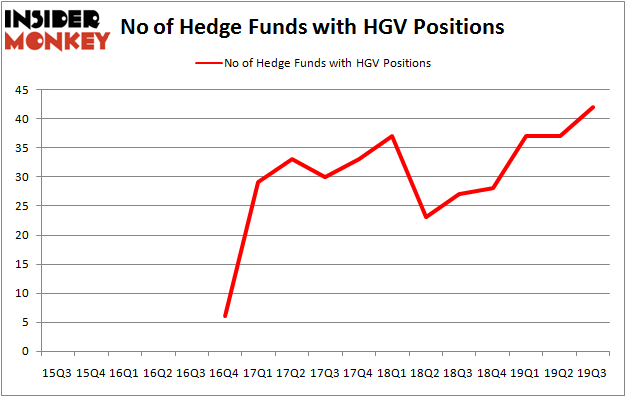 Among these funds, Long Pond Capital held the most valuable stake in Hilton Grand Vacations Inc. (NYSE:HGV), which was worth $251.7 million at the end of the third quarter. On the second spot was Zimmer Partners which amassed $193.6 million worth of shares. P2 Capital Partners, Centerbridge Partners, and Empyrean Capital Partners were also very fond of the stock, becoming one of the largest hedge fund holders of the company. In terms of the portfolio weights assigned to each position Centerbridge Partners allocated the biggest weight to Hilton Grand Vacations Inc. (NYSE:HGV), around 23.84% of its portfolio. P2 Capital Partners is also relatively very bullish on the stock, setting aside 9.73 percent of its 13F equity portfolio to HGV.

As industrywide interest jumped, key money managers have been driving this bullishness. Empyrean Capital Partners, managed by Michael A. Price and Amos Meron, created the most outsized position in Hilton Grand Vacations Inc. (NYSE:HGV). Empyrean Capital Partners had $67.8 million invested in the company at the end of the quarter. Benjamin Pass’s TOMS Capital also made a $14.4 million investment in the stock during the quarter. The other funds with brand new HGV positions are Robert Emil Zoellner’s Alpine Associates, James Dinan’s York Capital Management, and Himanshu Gulati’s Antara Capital.

As you can see these stocks had an average of 15.5 hedge funds with bullish positions and the average amount invested in these stocks was $226 million. That figure was $1079 million in HGV’s case. AMC Networks Inc (NASDAQ:AMCX) is the most popular stock in this table. On the other hand Proto Labs Inc (NYSE:PRLB) is the least popular one with only 8 bullish hedge fund positions. Compared to these stocks Hilton Grand Vacations Inc. (NYSE:HGV) is more popular among hedge funds. Our calculations showed that top 20 most popular stocks among hedge funds returned 34.7% in 2019 through November 22nd and outperformed the S&P 500 ETF (SPY) by 8.5 percentage points. Hedge funds were also right about betting on HGV, though not to the same extent, as the stock returned 7.2% during the fourth quarter (through 11/22) and outperformed the market as well.