Hedge Funds Have Never Been This Bullish On Guardant Health, Inc. (GH)

Guardant Health, Inc. (NASDAQ:GH) has experienced an increase in support from the world’s most elite money managers of late. Our calculations also showed that GH isn’t among the 30 most popular stocks among hedge funds.

What does smart money think about Guardant Health, Inc. (NASDAQ:GH)?

Heading into the second quarter of 2019, a total of 14 of the hedge funds tracked by Insider Monkey were long this stock, a change of 100% from one quarter earlier. On the other hand, there were a total of 0 hedge funds with a bullish position in GH a year ago. With hedge funds’ positions undergoing their usual ebb and flow, there exists a select group of noteworthy hedge fund managers who were boosting their holdings significantly (or already accumulated large positions). 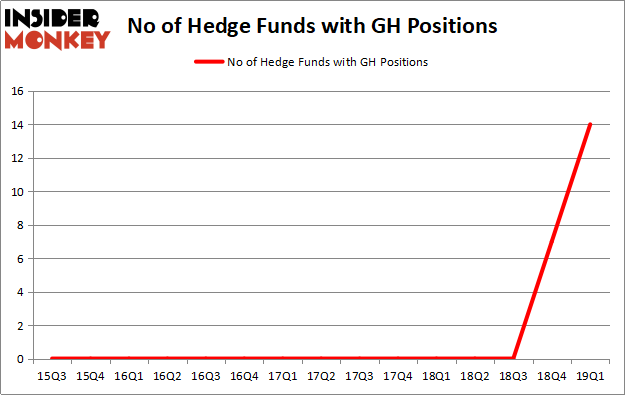 The largest stake in Guardant Health, Inc. (NASDAQ:GH) was held by OrbiMed Advisors, which reported holding $117.7 million worth of stock at the end of March. It was followed by Rock Springs Capital Management with a $13.8 million position. Other investors bullish on the company included Hitchwood Capital Management, Pura Vida Investments, and Citadel Investment Group.

With a general bullishness amongst the heavyweights, specific money managers were leading the bulls’ herd. Hitchwood Capital Management, managed by James Crichton, assembled the most valuable position in Guardant Health, Inc. (NASDAQ:GH). Hitchwood Capital Management had $10 million invested in the company at the end of the quarter. Ken Griffin’s Citadel Investment Group also initiated a $7.1 million position during the quarter. The other funds with new positions in the stock are Brad Farber’s Atika Capital, Anand Parekh’s Alyeska Investment Group, and David Costen Haley’s HBK Investments.

As you can see these stocks had an average of 22 hedge funds with bullish positions and the average amount invested in these stocks was $520 million. That figure was $175 million in GH’s case. HubSpot Inc (NYSE:HUBS) is the most popular stock in this table. On the other hand Perrigo Company plc (NYSE:PRGO) is the least popular one with only 18 bullish hedge fund positions. Compared to these stocks Guardant Health, Inc. (NASDAQ:GH) is even less popular than PRGO. Hedge funds clearly dropped the ball on GH as the stock delivered strong returns, though hedge funds’ consensus picks still generated respectable returns. Our calculations showed that top 20 most popular stocks among hedge funds returned 6.2% in Q2 through June 19th and outperformed the S&P 500 ETF (SPY) by nearly 3 percentage points. A small number of hedge funds were also right about betting on GH as the stock returned 16.7% during the same period and outperformed the market by an even larger margin.