Hedge Funds Have Never Been This Bullish On Great Southern Bancorp, Inc. (GSBC)

Many investors, including Paul Tudor Jones or Stan Druckenmiller, have been saying before the Q4 market crash that the stock market is overvalued due to a low interest rate environment that leads to companies swapping their equity for debt and focusing mostly on short-term performance such as beating the quarterly earnings estimates. In the first quarter, most investors recovered all of their Q4 losses as sentiment shifted and optimism dominated the US China trade negotiations. Nevertheless, many of the stocks that delivered strong returns in the first quarter still sport strong fundamentals and their gains were more related to the general market sentiment rather than their individual performance and hedge funds kept their bullish stance. In this article we will find out how hedge fund sentiment to Great Southern Bancorp, Inc. (NASDAQ:GSBC) changed recently.

Great Southern Bancorp, Inc. (NASDAQ:GSBC) has experienced an increase in hedge fund sentiment of late. Our calculations also showed that GSBC isn’t among the 30 most popular stocks among hedge funds. 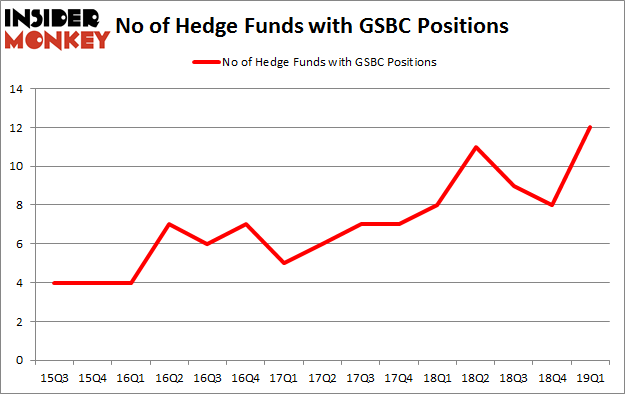 Among these funds, Renaissance Technologies held the most valuable stake in Great Southern Bancorp, Inc. (NASDAQ:GSBC), which was worth $14.4 million at the end of the first quarter. On the second spot was AQR Capital Management which amassed $4.9 million worth of shares. Moreover, Millennium Management, GLG Partners, and Two Sigma Advisors were also bullish on Great Southern Bancorp, Inc. (NASDAQ:GSBC), allocating a large percentage of their portfolios to this stock.

As industrywide interest jumped, key money managers have been driving this bullishness. Citadel Investment Group, managed by Ken Griffin, initiated the most valuable position in Great Southern Bancorp, Inc. (NASDAQ:GSBC). Citadel Investment Group had $0.3 million invested in the company at the end of the quarter. Paul Marshall and Ian Wace’s Marshall Wace LLP also initiated a $0.2 million position during the quarter. The other funds with new positions in the stock are Peter Rathjens, Bruce Clarke and John Campbell’s Arrowstreet Capital and Peter Muller’s PDT Partners.

As you can see these stocks had an average of 10 hedge funds with bullish positions and the average amount invested in these stocks was $23 million. That figure was $24 million in GSBC’s case. M/I Homes Inc (NYSE:MHO) is the most popular stock in this table. On the other hand German American Bancorp., Inc. (NASDAQ:GABC) is the least popular one with only 6 bullish hedge fund positions. Great Southern Bancorp, Inc. (NASDAQ:GSBC) is not the most popular stock in this group but hedge fund interest is still above average. Our calculations showed that top 20 most popular stocks among hedge funds returned 6.2% in Q2 through June 19th and outperformed the S&P 500 ETF (SPY) by nearly 3 percentage points. Hedge funds were also right about betting on GSBC as the stock returned 14.4% during the same period and outperformed the market by an even larger margin. Hedge funds were rewarded for their relative bullishness.